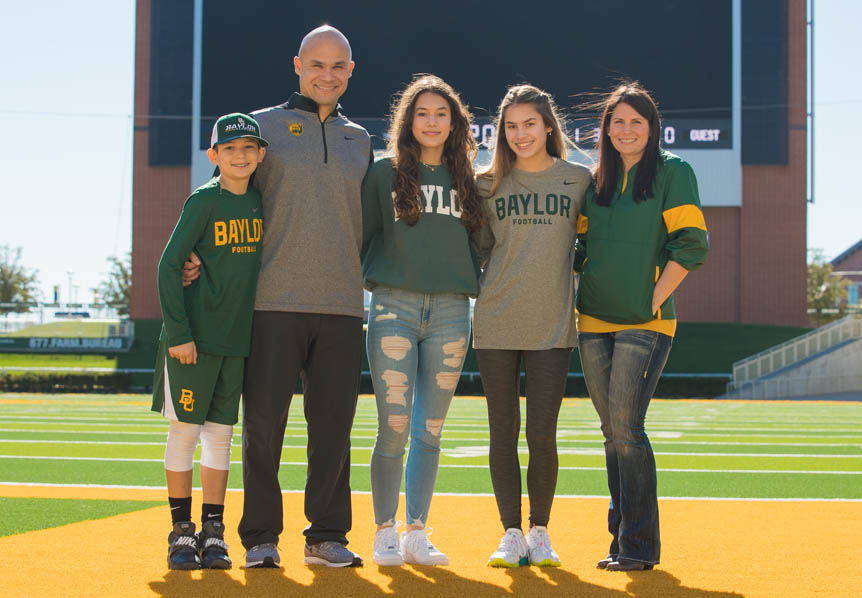 Why do we coach? It’s a simple enough question, and for many coaches, it comes with a simple enough answer. Maybe your father was a coach, and it runs in your family. Maybe it just happened, because once your playing days ended, you still wanted to be involved in the game, and coaching was the most straightforward way to stay involved.

For a lot of coaches the answer is far more varied and nuanced.

First-year Baylor University head coach Dave Aranda is one such. When asked why he coaches, the answer comes as smoothly and quickly as you might think it would from a Division I FBS head coach. He articulates the answer with the calm demeanor and ironclad practicality of a warrior monk.

Aranda channels Theodore Roosevelt in his responses. He “speaks softly,” certainly, but if you’ve watched his defenses play over the years, he also “carries a big stick.” He has gone far, no question. He ended last season as defensive coordinator for Louisiana State University, emerging victorious with a national championship trophy in his hands. Rooseveltian indeed.

And yet, his answer to the question of why he coaches is woven with many threads, all intertwined, binding together a philosophy of coaching centered on servant leadership.

“I coach because for me, it’s always been about trying to help others serve others,” says Aranda. “When you’re helping people and really getting to know your people, your team, identifying strengths, and putting your people in a position to maximize those strengths, it’s the best.”

On the opposite side of that coin, Aranda is just as enthusiastic about addressing weaknesses, whether it’s fear or avoidance or any number of traits that detract from a person’s overall abilities.

“The hardest one to work on is probably ego, but to get to work on those things and find coaches and players who will allow themselves to be vulnerable in the moments when those things can really be worked on, that’s the stuff I love,” he says. “You come out of it a better person, a better teammate, a better son, a better husband, all of it. I mean that; I feel it. To get the right people who can dive into that and be in that space and be productive, that’s the heartbeat of a team.”

Most coaches can probably understand what Aranda is driving at here. When he played at California Lutheran University for Scott Squires, he benefited from Squires’ having played for College Football Hall of Fame coach Forrest “Frosty” Westering, a man well known for his motivational speaking and his efforts to spread his positivity and outlook on life.

“We had a lot of ‘Frosty-isms,’” says Aranda. “For example, how do you live your life? Are you in a mirror room or a window room? If you’re in a mirror room, all you see is yourself. Everything’s about you. It’s about what you get. When you’re in the window room, you’re always looking out. You’re looking at your team members, understanding what they need and how best to serve them. If you get close enough to that window, a lot of times you see a small reflection of yourself, and you know that your teammates are looking after you too. I have faith in that. I think, just a person or a coach, you want to put your work into others, and that’s part of being a team. So I guess that would be my answer to your question.”

It’s a good answer, and it’s due in no small part to the fact that if you have a team full of individuals whose goal is to serve each other before themselves, you can generate power from reservoirs so deep they can’t be measured.

Currently however, players’ abilities to lean on each other and serve each other are somewhat limited by the coronavirus, which prevents each of us from getting close to one another. Shoulders to cry on have become virtual shoulders, often pixelated with buffering video streams and sketchy audio.

The closeness of which Aranda speaks is tied tightly to concepts like proximity and sensory perception, concepts that can become vague and even jarring when communicated in low resolution over a Zoom call or Google Meet. Still Aranda doesn’t shy away from the challenge.

He lives for it.

“Your communication must be authentic,” says Aranda. “We’re working on a philosophy here of leading from the heart and coaching from the heart and what that means. That is definitely a huge part of who I am. I remember growing up and wanting to be the people I was seeing. Their flash, their bravado, maybe even their ego, I just wanted to be that. But after wearing those other people’s faces, after experimenting with those personalities, you come to a spot where it’s just really easy to be yourself. You’re defined and you have to be comfortable in that.

“There are probably a lot of coaches who don’t want to have this discussion, and that’s too bad, because the ability to feel comfortable in your own skin and be who you are, it is all for the better and it makes you authentic. I think players and coaches can feel that when you’re truly being authentic. It matters to them and it moves them.”

Instead of hurdles, Zoom calls become just another method for communicating the sincerity with which Aranda coaches. Virtual meetings become less of an impediment to solid communication and instead become the tool they were meant to be.

“When there’s sincerity, people tune in,” says Aranda. “You have to be sincere and purposeful in showing them that you care about them and that their interests are your interests. You take the time to understand and get to them and build them up. At heart, everybody needs that and everybody wants it. It’s invited. So, when we are in those virtual meetings, I think the ability to have standards, accountability and high expectations, it works. I think all of us are high achievers, and we want to be the best version of ourselves. We want someone that can guide us, lead us, motivate us and get us to that spot. When you can be truly authentic, the players will see that too.”

When players do come back in full, many will come back in a different frame of mind than they had when they left. It will be important for coaches to be sensitive to the fact that many of these children — and most of them are children, lest we forget — are still mentally vulnerable to the hardships imposed by the coronavirus and COVID-19.

For months, they were basically stuck at home — for better or worse — with questions circling in their minds. You
have to remember that for the last decade or more, each of these young people were on a historically successful road. They defined themselves, and were defined by many in their communities, as successful individuals, athletically superior, determined with an unmatched will to win. All of a sudden, much of that was ripped away and took on a meandering form, maybe not exactly rudderless, but certainly not safe and secure in the narrative they’ve lived for many years.

That kind of uncertainty can lead to unforeseen consequences, and those consequences can be different for every single athlete and coach on a team. It’s a taste of “life after football,” which is a life that every player will eventually lead, though many intentionally avoid thinking about it. For some, it’ll be eye-opening, maybe even interesting. For others, it will be soul-crushing, devastating and scary.

“The longer this has gone on, I think there’s a loss of identity among players,” says Aranda. “They see themselves as a football player. This is my routine. This is the backpack that I wear with the logo, and this is the sweatshirt that I wear every day, and these are my buddies in the locker room. There is a loss of structure and a loss of identity, and it’s not just with football, it’s with school. With online learning, not having the structure, the four walls and just the teacher in a classroom making that impact and that connection, you lose identity and structure.”

To combat those losses, Aranda holds meetings on Fridays specifically to discuss these issues. Throughout the week, he’s communicating about these topics and talking with his staff, diving into how everyone feels about this and trying as best as possible to focus on the process. Whether that’s changing up a routine or being intentional about the work they’re putting in, there’s always a re-focus on the “end of the road” or “the light at the end of this tunnel.”

“We’re getting there and these are the steps that are going to help us get there,” says Aranda. “Our players have to keep in touch with their coaches, mix up the position groups. We make sure to keep our position groups close, but if guys are friends with those other guys near their locker, we need to be intentional about creating Zoom meetings for them to interact. When they’re meeting, we’re all ‘Brady-Bunched’ in there so we can see the guys who are near each others lockers. The biggest thing here is purposefully identifying what guys need and doing our best to be present with them and help them fill in what they need.”

What a meaningless and overused phrase. The reality is that the new normal is the old normal, if your drive to succeed is powered by the need to get better every single day.

When everything else is changing around you, that drive stays the same.

We may all need to get used to seeing each other in masks, and reading body language instead of facial expression. We need to follow the rules so we don’t infect each other. Wash your darn hands, sneeze and cough into your ‘elbow pit,’ be intentional about protecting yourself and others. And do it all the time. That definitely amounts to change.

But what doesn’t change is the championship internal drive.

Aranda, who is a man of Christian faith, points to Matthew 7:13 from the Bible, which reads, “Enter through the narrow gate. For wide is the gate and broad is the road that leads to destruction, and many enter through it.”

The analogy is a good one, and clear too. Take the road less travelled. Choose to be excellent. No matter what challenges life throws at us, that is a choice we can make as players, coaches and people. But choose it in everything you do.

“We talked about that with our team very early in all of this, finding the narrow gate and trying to go from good to elite, and elite is just being the best version of ourselves,” says Aranda. “At this level of the game, almost everyone’s natural ability or natural talent is elite or close to it. There’s a ‘topping off’ level that they get to. But then, there’s another area beyond that, and anyone can get to it. It takes a lifetime of growth, and it’s uncomfortable work, but with effort and intention and process, it’ll help us all move forward and bring us together.”