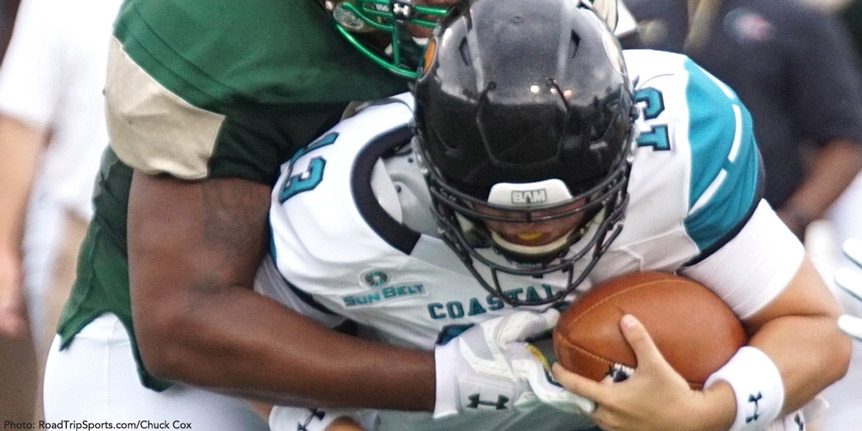 These are just a few of the many ball security drills that prepare our student-athletes for competition.

The Chant Drill is used to warm up the running backs. There are three phases of this particular drill.

Phase 1: Measure off 10 yards. You can have your players go two or three at a time, according to the number of backs you have. You can even have them all line up side-by-side and go all at once.

Phase 2: The carioca drill is a cross-stepping movement that propels the body laterally and will help improve lateral movement, agility and footwork.

Phase 3: The speed weave drill emphasizes closing space on a defender, lowering your profile (bending the knees) while moving fast, putting your foot in the ground at the defender (cone) and taking a short lateral step to the defender’s up-field arm. The lateral step-out rather than a crossover is essential to handle contact and maintain balance. On occasion in this drill, we put a pursuer starting 3 yards behind the ball carrier. The running back learns quickly there is no time for extra shakes or fakes. Pursuit is coming, so maintain your speed!

A major cause of fumbling is a player’s natural instinct to reach out with his hand to break his fall.

If that happens to be the hand in which he is carrying the ball, he will likely extend his arm and in the process expose the ball, making it more likely to be jarred loose by a tackler or by contact with the ground. Yes, the ground can cause a fumble. The purpose of the Monkey Roll Drill is to get the players used to falling while keeping the ball in contact with the body at four points.

Players A, B and C will line up side-by-side with 2 yards between them. Player B, the one in the middle, starts the drill by rolling to his right. Player A, the one Player B is rolling toward, rolls over Player B. Player B then gets up and prepares to roll back the other way. Player A, meanwhile, will continue to roll until he gets to Player C, who will then roll over. Player A will get up and roll back the other way, first rolling over Player B, who will be arriving on his feet. And so forth. Do this a couple of times. This drill also teaches guys to protect the ball when they fall.

Take a ball and place a harness over the ball. The harness has an elastic strap attached to it. The first part of the drill is to pair your running backs up and have one of the running backs tuck the ball away.

His partner will hold the strap and, while jogging 3/4 speed, try to pull the ball out from partner for about 20 yards. Switch arms coming back. Switch positions and repeat the drill.

This is another drill we do at Coastal to help prevent fumbling. Protecting the football, to me, becomes a pride thing. The football is the most important thing on the field and everyone wants it, even the coaches. Fumbles are not accidental; they are preventable. The Rip And Strip Drill is a competitive drill that will help you get that point across. One player is the ball carrier. He is given the ball with the instructions to “fold over it” with “both hands on both point” and “squeeze the ball into the belly.” The defender reaches in and gets his hands on the ball.

At the starting signal, the defender does anything he can to rip, strip, pry or twist the ball from the ball carrier’s grasp. The ball carrier may twist but he may not run away and he may not deliberately go to the ground. If they should happen to fall to the ground, the contest continues. Give them a time limit. Ten or 15 seconds may be enough for your guys at first.

It is an excellent drill for building trust in your players while developing better hands when they are receiving balls.