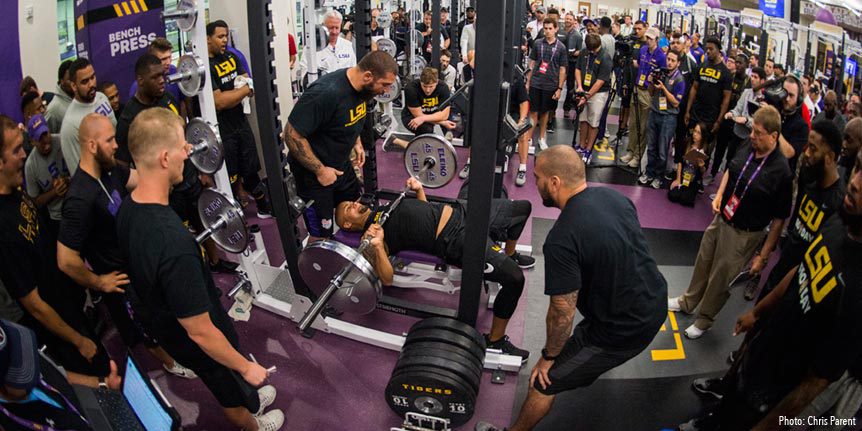 Athletic performance doesn’t have to be complicated.

Coaches have so much technology and information at their disposal, they often develop a distorted view of how to get the most out of their athletes. Before coaches get too wrapped up in any one technique or technology, they would benefit from taking some time to remind themselves of the basics of their profession.

LSU Assistant Athletic Director and Strength and Conditioning Coordinator Tommy Moffitt says his staff doesn’t waste time worrying about all of the different ways to be stronger or faster than the competition. This “keeping up with the Joneses’” mentality is counterproductive and inefficient. Instead, they focus on executing the fundamentals at an elite level – and it has continually proven to be a recipe for success.

“We’re going to coach every exercise and every set and every rep, every day. We call that the LSU way,” Moffitt says. “We’re probably not the strongest team or the fastest team in America, but we coach our guys really hard to do it the right way.”

The LSU staff makes education the number one priority in their approach to training. Coaches don’t just tell players what is expected of them; they teach them to perform to the expectation.

Moffitt says coaches have to clearly define learning objectives and goals on a daily basis, and continually demonstrate the steps necessary to meet those goals. Coaches must remain constantly engaged and be willing to reteach concepts continually until players can demonstrate mastery.

“Coaching is teaching,” Moffitt says. “I’m a big believer in talking to the team each day and giving them our goals and objectives that we want to accomplish that day. So, it’s part of education. You have to tell them what you want them to do, and then go out there and demonstrate it and teach it.”

The way Moffitt’s staff utilizes Tendo Units at LSU is a great example of how they educate athletes on meeting expectations and achieving their potential. Tendo Units are small devices used to easily measure power output and bar speed during exercises in the weight room. The concept centers on moving weight with velocity, and gives athletes a tangible way to track improvement.

The Tendo serves as a reminder to athletes of the technique they should be focusing on. The fact that improved technique spreads to other exercises indicates the effectiveness of giving athletes physical reminders of what’s expected of them.

Through consistently employing this technique, Moffitt says he has arrived at the point where the expectation for moving the weight quickly is ingrained in athletes, and coaches no longer need to demonstrate or remind them. The staff can instruct athletes to train as if the Tendo is being used and get the same results.

This use of Tendos provides a perfect example of the methods that have kept the Tigers competing at an elite level for the last two decades. The same approach can be applied to every facet of athletic performance. Coaches set goals for their players daily, demonstrate the way they are expected to reach those goals, and hold them accountable for their results.

It doesn’t need to be any more complicated than that.

This article was written by AFCA Insider editor Adam Reed.