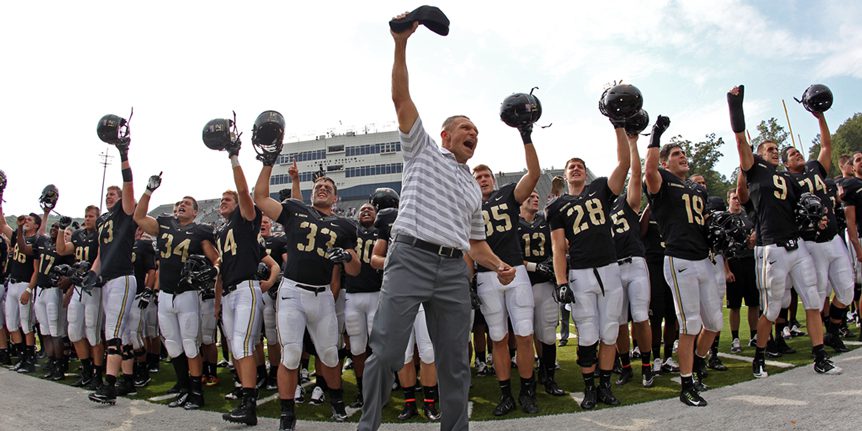 Jeff Monken has come prepared. He brought his hard hat, his tool belt and he packed a big lunch. So you’d better stay out of his way, because this man’s got a football program to run.

Monken, who is head coach of Army West Point Football, has been charged with the task of building up the Black Knights program. As a man with three decades of coaching experience under his belt, he knows that there are real challenges to overcome before his team can expect to experience significant on-field success at the United States Military Academy located in West Point, N.Y.

In 2014, despite experiencing some growing pains during Monken’s first season as head coach, his team showed real signs of improvement and posted more than enough key positive indicators to show that there are much brighter days to come in West Point.

These indicators should also put all future opponents on notice that the Black Knights will bring a physical style-of- play, a determination to impose their will and a razor-like mental focus with them each and every time they take the field on game day.

In his 2014 campaign, Army West Point Football finished fifth in the country in rushing offense at 296.5 yards per game. The Black Knights also finished sixth in fewest penalties per game with just 4.08 infractions per contest.

Each of those rankings can be seen as significant and affirming statistical payoffs for Monken. They both fall within two key categories that confirm his long-term vision for success at Army West Point, which are based on yearly program goals of being physical and possessing team-wide discipline.

Another positive checkmark for the Black Knights is that, despite going 4-8 in 2014, Army West Point Football made defending their home turf a priority and it paid off with a winning record of 3-2 in home games.

Monken envisions an Army team that uses disciplined players who make few mistakes, lining up five games per year at home, and giving opponents all they can handle in a hostile environment.

Those positives are enhanced even more, when combined with heavy doses of an offensive system like the triple-option running game.

According to Monken, it’s an ideal combination when you factor in the type of athletes the Black Knights recruit into their football program.

Prior to his arrival at West Point, Monken spent four seasons as head football coach at Georgia Southern University, compiling a 38-16 record and spearheading the program’s transition to the Football Bowl Subdivision (FBS) level from the Football Championship Subdivision (FCS) ranks.

A finalist for the 2012 Liberty Mutual “Coach of the Year” award, under Monken’s guidance, Georgia Southern was one of the top rushing teams at the FCS level, claiming the 2012 NCAA rushing title with 399.36 yards per contest. The Eagles’ running back tandem that year, Jerick McKinnon and Dominique Swope, established the NCAA record for rushing yards by teammates with 3,063 yards combined.

Monken cut his teeth on the running game as a young assistant coach and witnessed firsthand how a powerful running game can be football’s great on-field equalizer.

As a young coach, Monken learned the intricacies of the triple-option offense under one of the nation’s true option experts, Paul Johnson, as a fixture on Johnson’s assistant coaching staffs at Georgia Southern, the U.S. Naval Academy and Georgia Tech University.

Even more valuable than the X’s and O’s, however, were the things Monken gleaned while working for and observing Paul Johnson’s meticulous program-building process. As an assistant who was eager to learn more, under Johnson, the young coach felt as if he’d hit the coaching-knowledge lottery.

“When we got to Navy in 2002, I watched him build it up all over again. In the two years before Coach Johnson took over the Naval Academy, in the 2000 and 2001 seasons, the Midshipmen had a combined record of 1-20.

“In our first year at Navy, in 2002, we went 2-10. From that point on, starting in 2003, Paul Johnson’s teams at the Naval Academy never looked back. We had a run of five consecutive bowl appearances and never lost to either Air Force or Army again. While at Navy, our teams were 11-1 against our academy rivals.”

Watching Johnson never waver from his vision for the future, even after a 2-10 inaugural season at the Naval Academy in 2002, has clearly stuck with Monken and is a coaching lesson that resonates with him today.

It’s also the reason the Black Knights coach isn’t panicking or losing his resolve after going through a challenging 4-8 first season at West Point in 2014.

“I watched Paul Johnson take over a Navy program that was in really bad shape in almost every respect,” says Monken. “Coach Johnson turned it all around by building the program the right way, and doing so for long-term success.

“I am highly confident because that is the same, exact approach we are taking with Army West Point Football. Our plan for the program is sound.”

If Monken’s coaching background reads as vaguely familiar, it is probably because another former assistant coach and member of the “Paul Johnson coaching tree” – Ken Niumatalolo – currently holds the head football coaching position at the U.S. Naval Academy in Annapolis, Md.

“Ken Niumatalolo and I are close friends, and we worked together for a long time on Paul Johnson’s staff. He’s a great coach and an even better man,” says Monken. “I didn’t appreciate losing to him in the 2014 Army-Navy Game last year, though.”

On Dec. 13, 2014, the Naval Academy used a fourth quarter touchdown to earn a hard-fought 17-10 victory over Army in the annual Army-Navy Game. Held during the final week of the regular season, the game is one of college football’s marquee events each year.

“I’ve had the privilege of coaching on the sideline for the Army-Navy Game many times,” says Monken. “I’ve been involved a number of times as an assistant coach for Paul Johnson while at the Naval Academy. The 2014 season was my seventh game, and I was on the other side this time as head coach of the Black Knights.

“In those seven years, the final year was the first time I’ve ever been on the losing sideline during an Army-Navy Game, and it occurred when I was the head coach for Army West Point Football. I did not like how losing that game felt. We needed to change that quickly.”

One of the oldest rivalries in sports, the Army-Navy Game dates all the way back to 1890. In that span, the two military academies have played one another in college football 117 times. Despite a recent period of dominance from the Naval Academy, the all-time win-loss record remains close, with Navy holding the all-time series edge, 60-51-7.

With only a nine-game lead in the all-time series, it means prior to the start of Navy’s last winning streak (in 2002), it was Army who held the advantage in the rivalry.

Monken says unequivocally, that the annual college football game between Army West Point Football and the U.S. Naval Academy is an unparalleled, can’t-miss event on the sports calendar.

“Not just in terms of the intensity you feel standing on the field, or the long build-up leading into it as the last game of the year, or the atmosphere and the energy that fills that stadium on that day, or the fact that the Army-Navy Game has it’s own national television contract or the 100-plus year history of playing one another in so many college football games.

“There is another factor at work that separates the Army-Navy Game above all other rivalry events in sports.

“The Army-Navy Game is the greatest event in sports because it’s the only big-time rivalry game where all of the athletes who are playing in the game have taken a vow to give up their own lives and sacrifice themselves to protect the lives and freedom of every single person in the stadium who is watching the game.

“What other rivalry game in sports can say that?”