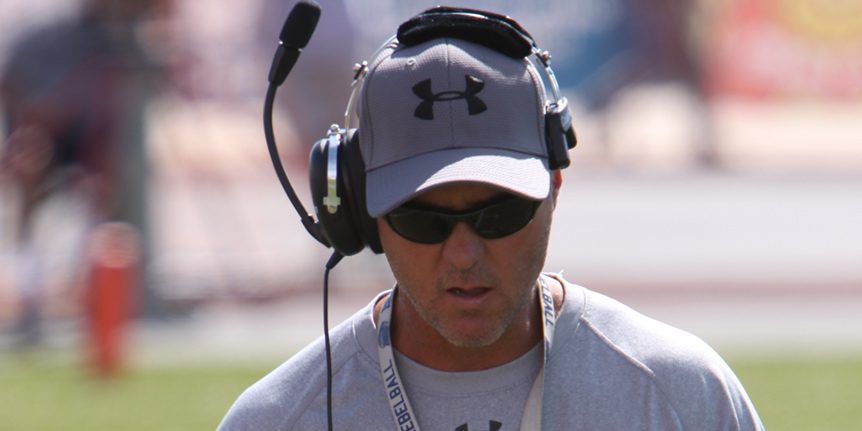 Football coaches understand the influence they have over others. The influence and impact that coaches can have on their players’ lives, their school and their community, are often the primary reason they took the job in the first place. Coaches embrace the valuable life lessons that only football can offer – the benefits of discipline, the value of hard work, teamwork, sacrificing individual achievement for the greater good, pushing the boundaries of your limitations and carrying yourself as a representative of a school and community – are all acquired tools that ultimately help young athletes for the rest of their lives.

Perhaps the greatest influence a coach has on student-athletes, however, stems from providing the mental training and physical techniques needed for dealing with and fighting through adversity. Adversity is an eventuality for all human beings, but it is in this area where football coaches can uniquely use the characteristics inherent to football participation and offer valuable guidance to impressionable, developing young men.

Andy Lowry, head football coach at Columbine High School in Littleton, Colo., saw the entire nature of his football program, as well as his very role as a known community figure, change forever on April 20, 1999, when a horrific school shooting perpetrated by two Columbine students, took the lives of 13 people (12 students and a teacher). It marked one of the most tragic events in United States history.

But where others succumb to being labeled a victim of circumstance, Lowry’s story tells the riveting tale of a man who dug deep within himself, and his religious faith, during a pivotal moment in time, to find the inner strength to teach his players how to embrace their role in history and overcome adversity. It’s part of the reason Lowry won the 2012 AFCF Power of Influence Award – an award that has grown in notoriety and is now officially presented by TeamSnap during the general session of the AFCA Convention.

“It went from a beautiful Tuesday morning, to utter chaos,” says Lowry. “I can’t explain the fear, disbelief and utter confusion we felt inside Columbine High School that day while the shooting was happening.

“The fire alarms were so loud that you couldn’t even think straight. And with the noise levels at that volume, no one could communicate with each other at all. All we knew is that there was more than one person inside the school shooting kids. That was real. It was happening.

“From there, everything else was up in the air. False information was spreading among everyone. There were rumors that there were 6 to 8 shooters,
additional gunmen on the roof who were shooting people as they came out of the school. No one knew the reality of the situation. It was all so surreal.”

As the terror and fear of that day passed, the next several days ushered in the brutal reality of what had happened, which led to despair and deep sorrow. In an unimaginable twist, the weeks that followed offered a second blow to the collective stomachs of Columbine’s football program.

“There’s something about our culture today, where we need to find answers,” says Lowry. “As a society, we seem to need to find somewhere to point the finger of blame. We want a reason why something happens.

“We can’t accept the fact that sometimes evil just happens. Sometimes there are no answers for evil and hatred. But our culture has a hard time accepting that.”

In the weeks following the shooting, Lowry says that the national media swarmed the Littleton area. He says that the media tried to find answers for why the school shooting had occurred, and in that search for a logical explanation, they looked into rumors of bullying and investigated the student- athletes of Columbine, specifically the football players.

“The media ran stories blaming my football players as the root cause of the shooting,” says Lowry. “Theories on football players bullying the shooters began to surface, theories which were completely untrue and unfounded.

“These stories surfaced out of the blue, without a shred of evidence, and later, when they were proven false, no retraction was ever published.

“It was astonishing and heartbreaking. My players were still in mourning, as we all were. They lost friends. They saw gruesome things that no kid should ever see in a school. We lost a sophomore football player. We were going to funerals. No one felt safe. We were just reeling. Our emotional and physical wounds weren’t even scabbed-over yet, and the media was picking those wounds raw.

“It is not an exaggeration to say that in the weeks following the shooting, that the national media did as much damage, and caused as much
harm to the people of Littleton, as the shooters did.”

Lowry says the mistreatment of his players by the national media triggered an instinctive reaction to over-protect his players. A reaction that ultimately proved unnecessary, as the bond forming at Columbine began to grow noticeably.

“As their football coach, and as a father myself, I felt more like a father protecting his kids. I wanted to wrap my arms around them,” says Lowry. “But we all knew the real truth. We knew that one of the shooters had an older brother, Kevin Harris, who was a former football player at Columbine. Kevin was, and is, a tremendous young man who remains close to the football program, as are his parents. So to tie our football athletes to bullying and causing this tragedy was just completely unfair to those young men.

“It was a tough time. All we had were each other. But the players on that team were a group of unbelievably tough young men. They were tough physically and tough emotionally. Fortunately, football is a sport where young men can harness their emotion and use it as fuel. The rumors and lies only made them stronger. Those players became like family and loving brothers to one another, and they used their emotion to earn their goals.”

Rising From The Ashes

In the two weeks following the school shooting, Lowry says that students and faculty from Columbine began to meet in groups at various locations to grieve and comfort one another. He says that the players on the football team, however, began to meet as a private group at a local church. The coach could see a unique bond begin to form.

“It was fascinating. When there’s been a tragedy, the gut reaction is to find your family and stay with them,” says Lowry. “But it wasn’t that way for the football players. Those players wanted to be with each other as much as possible. They became a family and felt true brotherhood in every sense of the word.

“I still can’t believe what that sense of brotherhood allowed my players to achieve that year, culminating in our school’s first-ever state championship in December of 1999. The journey to the state title featured one unbelievable thing after another.

“We had finished 9-2 in 1998 and knew we had a good team. But after the events in April 1999, I don’t think anyone would have faulted us if we would have fallen off a bit. But those players wouldn’t allow that to happen.”

Once the tournament started, according to Lowry, the players’ collective willpower and newly formed bond took over. In the quarterfinals, Columbine came from behind to beat a highly-rated rival. He describes how his team fell behind 14-0 in the state championship game to a powerful opponent – a team that was rated as perhaps the best team in the state. Trailing in a football game, however, didn’t bother the Columbine players one bit.

“Having gone through what our young men went through seven months earlier, falling behind in a football game by two touchdowns did not seem like adversity to our players,” says Lowry. “My players had experienced real adversity. As a result, when they fell behind, they fought even harder. And that mental toughness focused them on the task at hand and they refused to lose. The 1999 state championship, coming a mere seven months after the tragedy, was truly an example of triumph over tragedy.

“It was a great lesson for us all. It’s a lesson we use to this day. That message that we’re one Columbine football family still guides and bonds us today.”

Lowry says that when he looks back and reflects on 1999, it seems clear now that everyone was in survival mode – survival as a school, as a community, as coaches, as kids and as people.

“At that moment, we just clung to those things that could keep us from drowning in despair,” says Lowry. “For me, that meant clinging to my faith, my family, my friends and football.

“Football, by its very nature, is almost tailor-made to handle adversity. You bring a group of young people together, and you play on very high emotions, a sense of brotherhood, and you become a family. The bond is singular and unique.”

The coach also says that, looking back, he doesn’t know if he could have survived mentally or emotionally during that dark period if it weren’t for that unique group of young football players.

“We keep perspective and never forget, though. The 1999 state championship, and the four other titles we have won since then, will never bring back the 13 lives that were lost on April 20, 1999.”

Lowry calls his 1999 team “a testimony to the strength of the human spirit” and says that those young men provide an example of what can happen when a group of people commit together, love one another and work together to accomplish a goal. The coach says that the event itself, as well as those special players, taught him something that he’ll never forget.

“Experiencing tragedy, you find yourself looking back and pondering what type of person you’ll be going forward,” says Lowry. “If an event like that can’t make you a better person, a better father, a better coach, a better teacher – just a better overall human being – then nothing else can.”