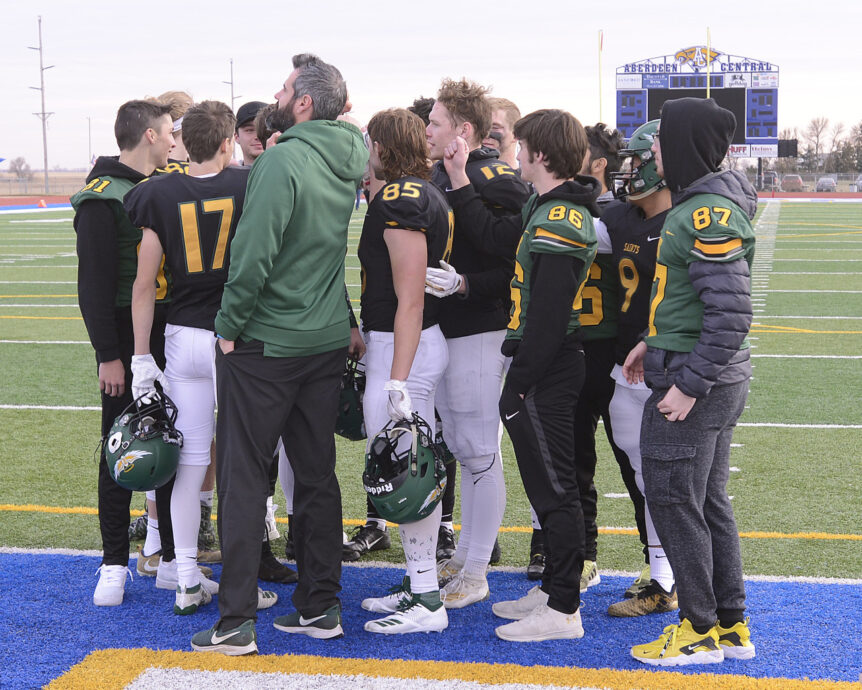 With so much use of the Read and RPO schemes in football today, many people think that wide receivers need to block even less on the perimeter than ever. I tend to disagree because in many of these cases the ball is getting out to the perimeter even faster and usually to a multiple-receiver formation where only one receiver is intended to get the ball. This means the other receivers will be tasked with blocking the perimeter defenders to maximize the gain of the play. Routes on air, 7-on-7, 1-on-1 and pass sections of team practice provide a lot of video and coaching for the pass game and, because of this, we spend a lot of time working blocking technique during our individual periods, even more at times than our route running technique.

There are three key components that are essential to successful blocking on the perimeter with the first being attitude. You must WANT to get out there and make blocks for your teammates to have success. Secondly, you must have effort. Defenders aren’t going to stay blocked unless you make them stay blocked. They want to get off the block and make that big tackle for a loss. The third component essential for perimeter blocking is technique. You need to have the right tools to be successful with the job at hand. Attitude and effort have to become part of the identity of your room, the guys have to buy-in to wanting to be the aggressors when they are called on to block, and it has to be celebrated and reinforced by the coach until it becomes the expectation of the players that, “This is how we do it here!”

When you get your playmakers to start asking to rewind the video because you didn’t mention a pancake or missed a guy driving someone out of bounds on the sideline, or they hype up the meeting room because your slot receiver just stonewalled the outside linebacker or safety, then you know you have guys that have bought in. So, you have to celebrate and make a big deal out of it when the guys use the techniques and play with the attitude and effort that it takes to make a difference on the edge to get someone else the extra yards or into the end zone until they take over and start doing it themselves.

The first drill that I utilize is a read and react drill referred to as the “Stoplight Drill.” See Diagram 1. 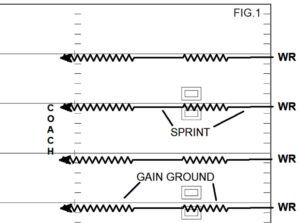 I line the wide receivers up in four lines, five yards apart on the sideline and facing into the middle of the field. I stand on the near hash and have the first group start sprinting toward me, when I raise my arms they will stop sprinting and get into an athletic position with their feet shoulder width apart and their hands in front of their chest. Without stopping, they will continue to gain ground to their imaginary defender using six-inch steps. They MUST keep moving forward, not just pound their feet in place, we need them to eliminate the defenders comfort zone. When I drop my hands, they get back into a sprint until I raise my hands again and they return to the gaining ground technique, when they get to the hash, the rep is over, and the next group is up.

Phase two of this drill is “Stoplight with Re-direct.” See Diagram 2. 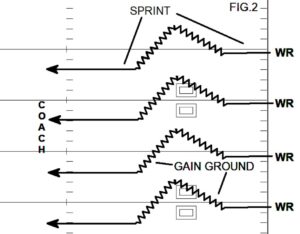 The set-up and start of the drill are the same, but now when they begin to gain ground I point to the left or right so that they have to re-direct to react to a defender trying to avoid contact. The key here is that they continue to move forward while moving laterally, it should look like a 45-degree shuffle. At this point I can move them to the other side by pointing the other way, hold my hands straight up which signals them to go back to gaining ground straight forward, or drop my hands so they can return to a sprint. I try to keep them guessing so that they are reacting to what they are seeing and not following a pattern or guessing at what I’m going to do next. This is about body control and reacting to what you are seeing to be able to get your body into a position to intercept the defender. 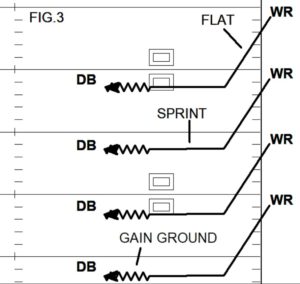 The wide receivers on the sideline will go on cadence. They will work on a flat angle to get to the outside shoulder of their defender before they get halfway downfield to him, and once they are even with the outside shoulder they will work straight up the field until they are 2-4 yards away. Then they will begin to use the gain ground technique from the stoplight drill until they have completely closed the cushion of the defender and are aligned on the opposite shoulder from the side they started on. I usually do 2-4 reps to the right or left, then switch blocker/defender.Then I will go to the opposite side for another 2-4 reps and switch blocker/defender again.

The punch is where we start introducing the use of hands to get control of the defender and I do mean PUNCH! This is a moment for the wide receiver to be the aggressor and deliver a blow to the defender, so we want to be intentional and violent with our hand strike. We drill this using the “3-Punch Drill.” The wide receivers will line up along the sideline and pair up with a partner about three quarters of an arms-length away; one side will be the defender to start, the other side will be the blocker.

The defender simply stands still and has his hands at his side for this drill. The blocker starts out in an athletic stance with his feet parallel under the hips/shoulders; elbows should be bent and pulled back behind the back so that the hands are just outside the hip pads loaded and ready to strike. Many people refer to this as “holstering the guns.” On the whistle, the blockers will deliver their punch and hold the position so that I can ensure proper hand placement. I am looking for elbows in tight, thumbs up, hands on the outer edge of the chest protector and first point of contact behind the heel of the hand. This ensures the most force is being delivered from the arms of the blocker to the chest of the defender. Remember, we are being the aggressors here and we want a shocking blow to the chest. A double-whistle blow resets the blockers to the start position, and we will repeat for a total of three reps before we switch roles of blockers/defenders.

After they’ve gone through the 3-Punch drill a couple of times, we add in the steer portion after the third punch. To steer our defender where we want him to go, we pull in with the same-side arm that we want him to turn to and extend the opposite arm. So, if we want to move him to the wide receiver’s left, the wide receiver pulls in with the left arm and extends his right arm, which will turn the shoulders of the defender to allow us to maintain position between him and the ball carrier. The way that this gets added into the drill is after the third punch, the blocker holds the position and the coach simply yells “LEFT” or “RIGHT” and the blockers react by turning their defender to the direction that was called out.

We’ve taught the wide receiver how to get into position using his feet, take away the defender’s cushion, where and how to punch to gain control and how to steer to maintain control, but the defender is going to keep fighting to get off the block to make the play. So, how do we maintain or regain position? By implementing the shuffle-punch. See Diagram 4. 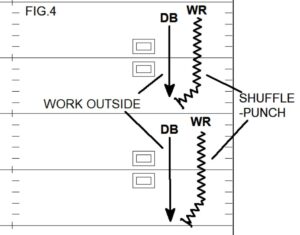 The wide receiver is going to shuffle, or cross-over run, if needed, to try to get his head back across to the other side of the defender while he is moving his feet. He is also going to punch the outside shoulder/pectoral, like a boxer throwing a hook, to slow the momentum of the defender as he works his head into position. The hook-punch to the shoulder should be thrown as hard as the wide receiver can to try to slow down the defender; it should not be a quick, rapid-fire punch to the shoulder. The goal is to gain position again using as few punches as necessary to get the job done. Once position is established, the wide receiver will begin blocking the defender downfield.

Now we take all the pieces that we’ve used and roll it into one big drill. See Diagram 5. 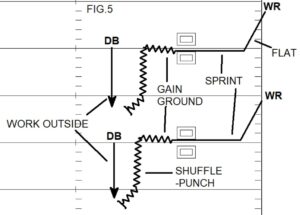 The set-up is the same as the gain leverage drill from before with groups on the sideline and the top of the numbers offset by five yards. Wide receivers work flat to get to the opposite shoulder of the defender and then upfield to close the cushion and use the gain ground technique to stay under control as they get closer.

Once they have completely closed the gap, they are going to punch to the chest plate and work to control the defender. The defenders are instructed that as soon as the wide receiver makes contact they are to try to get back to the outside of the wide receiver, which will cause the wide receiver to use the shuffle-punch technique to regain leverage and control for the second time during this drill. Typically, 2-3 reps in each direction for each combination of blocker/defender gets them working hard.

The first couple of times through these drills the pace will be 50-75% to get the feel of the drill and the movements, but after that I challenge my guys to really make one another work through these drills so that they are accustomed to doing it at full speed. We invest time in blocking almost everyday that we have individual time throughout fall camp, in-season and spring ball. If we don’t invest the time in it how will we ever get better at it?

Also, by investing the time in it each day it shows the guys that this is something important to us as a football team and to our coaching staff, which really helps to get the buy-in that is so important. Like anything else, they know the terminology that I use, so after a play when I yell, “Shuffle-Punch,” across the field, guys know what adjustments to make to be successful next time, or they ask questions like, “I’ve got to Gain Ground earlier, don’t I?” It means they are learning and understanding what is being taught and they are beginning to self-diagnose errors.

So, celebrate the pancakes and out of bounds blocks, hype up your guys for playing the game in an unselfish way and doing the dirty work that leads to wins and championships, and get them to be the aggressors when it comes to being a physical presence in the run game. They can get it done; it just takes attitude, effort, and technique.

Travis Lueck enters his fourth year as an assistant coach for the Saints and will work primarily with the wide receivers. Lueck also assumes the roles of special teams coordinator and director of football strength and conditioning.

Lueck, a native of East Grand Forks, Minn., earned NCAA Division II First Team All-America honors in 2003 as a return specialist at North Dakota. He helped his team to a North Central Conference title going undefeated in conference play. UND finished their season as the runner-up for the NCAA Division II National Title.