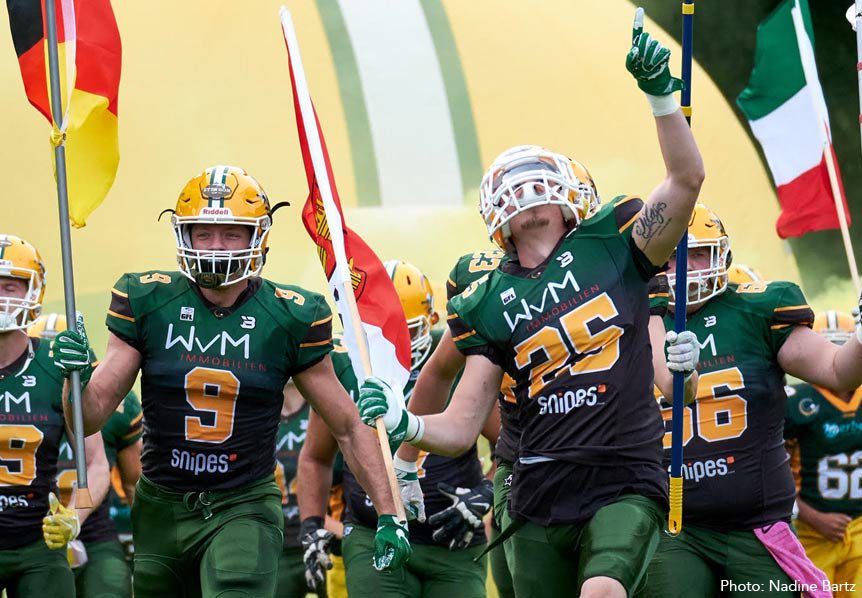 Though AFCA member Thorsten Estermann lives in Germany, he began his coaching career like many American football coaches. His specialty was taking care of the new kids – the greenhorns showing up for the very first time – and teaching them the basics: back-peddling, catching, how to hold the ball and run with it. He did this while the rest of the team was going through indies, skelly, inside run and team drills.

In subsequent seasons, he coached offensive line and running backs, even becoming head coach of the 12-14 year-olds on his under-14 (U14) team.

What makes Estermann different is that – early on in his career, as early as 2007 – he conducted his coaching activities while playing for his team. His 2019 campaign marks his fourth year of coaching for the Cologne Crocodiles, a long-term member of the German Football League (GFL) and one of the oldest American football clubs in the GFL at 39 years old.

“I started coaching adults in 2015 with the Cologne Crocodiles,” says Estermann. “The GFL is the first and best of our eight leagues in Germany. My former head coach from when I was coaching the youth team became the offensive coordinator in Cologne and asked me if I wanted to coach the inside receivers.”

The year 2015 was his first in Cologne, and he experienced only limited success.

“I’d never coached adults before,” says Estermann. “I thought it would be easier than it was with the kids, but it turns out that adults are just as tough to teach. Also, I didn’t have any experience playing or coaching inside receivers.”

While that may sound unusual to American coaches – asking a fellow coach to instruct players on a position he’s never before played or coached – you have to remember that American football is still rather young in Europe and throughout the rest of the world. For most foreign countries, American football is still in start-up mode, or pre-revenue as the business community styles it. Still, the numbers are growing.

Currently, there are about 80 countries around the world that have well-organized federations for American football, according to the International Federation of American Football. In China, privately funded football training organizations — Great Stone Gridiron and Skyway — have attracted more than 30,000 youth football players across 100 purpose-built facilities. Those organizations expect the number of participants to increase to 120,000 in the very near future. Other countries with teams playing a high-level of football include Austria, Canada, Brazil, Japan, Mexico, Australia, and Germany, which has 45,000 registered players and around 450 club teams. At the same time, the international clubs are often structured differently from those in the U.S. The American system relies on youth programs, followed by high school football and college football, before the vast, vast minority of players and coaches even sniff the ranks of the NFL. It’s a scholastic model. International organizations are often professional clubs from the youth level on up, much like the professional soccer clubs in those nations.

“Most teams [in Germany] are club-organized, with one or two adult or senior teams,” says Estermann. “More and more clubs have female teams now. Then there are the youth teams, U19, U16, U13 and U10.”

Estermann’s role within the club team is ever-expanding.

“I am still coaching running backs, but I also break down practice film and game film, and I scout,” he says. “I took a major role in recruiting this year. So, besides my full-time job, I think I put in 20-25 extra hours each week for coaching.”

The Demands Of Sacrifice

If you come from the U.S., odds are you take football for granted. It’s our most popular sport. It’s woven so tightly into our culture that we make multi-million-dollar movies about the game, and we do it so often that we forget they even exist. Some of these titles will likely make you say, “Oh yeah, that was a good one.”

You’ve got Rudy, Any Given Sunday, We Are Marshall, The Blind Side (Sandra Bullock won an Oscar for that one), Jerry McGuire, The Longest Yard (old and new), Remember The Titans, The Replacements, The Last Boy Scout, Invincible, Friday Night Lights, Varsity Blues, even The Waterboy. This is just a fraction of the football movies made in the last 30 years alone. How many of you have seen the football movies that pre-date those? What about Paper Lion, All The Right Moves, North Dallas Forty, Heaven Can Wait, The Freshman, Horse Feathers and Knute Rockne: All-American starring Ronald Reagan?

You’ve got the great college football games of recent memory. Clemson Vs. Alabama (2018, 2015, 2016), Alabama vs. Georgia (2017), Auburn vs. Oregon (2010), Texas vs. USC (2005), Ohio State vs. Miami (2002), the successive seasons of Notre Dame football. You’ve got the eight-year stretch in which Lance Leipold led the University of Wisconsin-Whitewater to six NCAA DIII National Championships, which is coincidentally the same number of total losses his program suffered over the same timeframe. Yes, I’m from Wisconsin. What of it?

Germany and other countries around the world, suffice to say, do not list American football among the cornerstones of their cultural heritage. The reality in foreign countries — and specifically from Estermann’s perspective — looks much more daunting to interested players and coaches.

Most of the coaches and players have full-time jobs, working their normal day-shift wherever they work, before donning the whistle or suiting up for practice. They start work at 6 am and work until 5 or 6 pm, making it to the practice field by 7:30, often practicing until 10 pm.

Plenty of football teams do not have their own field but play instead on soccer fields. Facilities are often modest. Locker rooms are a luxury. Some fields do not even have lights, so teams have to stop practicing at dusk. It is up to athletes to hit the gym on days they don’t practice or watch tape on their own.

Almost none of the players get paid for playing, not even in the top German league. Most have to pay for the gas, gym membership, helmet and pads on their own. The only players who get paid are the American imports who fly in for the season.

The seasons are long. Teams start workouts in November. The season starts in late April, and if you make it to the playoffs, the season lasts until October. A team that makes it to the final may play as many as 19 games during the season. If you’re fortunate enough to make it to the European Championship, tack on another two or three games for good measure.

Then, when the season ends, the NCAA and NFL games are on TV and players stay up all night due to the time difference to watch the games. The earliest NFL games begin at 7 pm, followed by the 10:30 pm game. The Sunday-night NFL game starts at 2:30 am, local time.

“We do not have our own gym, no ice tub or hot tub or athletic trainers who work with our players. We don’t get massages,” says Estermann. “When I was still playing, my right guard was a 44-year-old, full-time butcher. He did not go to the gym but was strong as hell. He did not study the playbook and there was no way he was watching tape. But he was there every day. He was good, and he loved the game. So, yes, most of us are crazy and passionate about football.”

This unquenchable thirst and undeniable passion for the game crops up again and again in American football circles overseas.  The drive to win and love for the game runs as deep and pure as water drawn from the depths of the Bavarian Alps.

Many young players harbor dreams of coming to the U.S. to play college football, even though significant challenges exist that prevent them from doing so.

One of the major hurdles German players must overcome is the fact that in Germany, a college education is provided at no cost. So, why buy the cow when you can get the milk for free?

German athletes would need to decide to forgo free college and potentially pay for tuition, fees, books, room and board, to play the game they love. Most would do it at the drop of a hat.

The other major hurdle is that currently, the way FBS rules are written, FBS coaches must meet requirements that differ from those at all other levels of NCAA football. Live evaluations of prospects must occur not only with the specified recruiting calendar, but must take place at scholastic events. Because of the fundamental organizing principle behind many foreign teams — the professional club model — FBS coaches can’t often view prospects in a live setting because those settings are inherently non-scholastic. And because of the professional aspect of the club model, scrutiny must be applied to concepts of amateurism. Players who are paid anything above and beyond “actual and necessary expenses,” as defined by the NCAA, may no longer be eligible to play for NCAA football teams.

Still, the desire and drive to play American football in the U.S. is astonishingly present among foreign prospects.

“Most of our players on the GLF team are basically too old to go to college,” says Estermann. “But we have had some great successes getting some of our youth players into college. And basically, everybody would love to earn the chance to go to college in the U.S. and play football.”

Matz Peters played club football for the Cologne Crocodiles under head coach Claus Biedermann. In 2015 with the Crocodiles, he earned the title of Most Valuable Player after leading his team to 12-0 record and a German National Championship. He was also named MVP in 2016 with Cologne, as he helped the Crocodiles go 11-1 on the season. He crossed the pond to play for New Mexico Military Institute in Roswell before moving on to Murray State University, where he currently plays defensive lineman.

While names like Björn Werner, Sebastian Vollmer and Markus Kuhn may not be household names in many American homes, you can be certain that German football players regard these gentlemen — all current or former NLF and/or NCAA players — as heroes of the game.

“The players’ passion for the game — in my opinion — it’s huge,” says Estermann. “Why would our players walk away from playing in Germany? Because it is a great experience and the dream of playing in the NFL is big — and possible — as we have seen with Vollmer, Werner, Kuhn and others.”

Today more than ever, American football is a global game and is growing. It’s still not likely that the next foreign film to win an Academy Award will be a football movie, but you can be certain that as the 2019 season ramps up in America, there will be a greater presence of foreign players on our domestic football fields. As we all work toward continuing to improve the safety of the game and celebrate its inclusiveness, it is likely we’ll see American football’s global expansion continue apace, and more people than ever will benefit from the lessons and values that our great game teaches to those with the passion to play and the willingness to sacrifice.