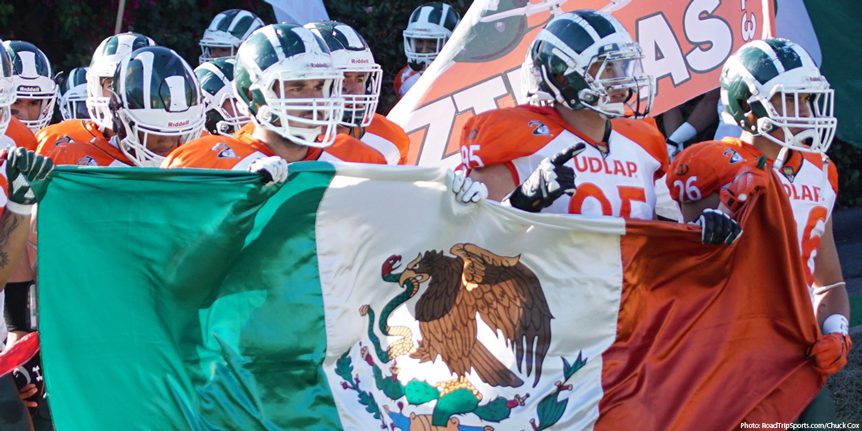 There is no other sport more closely associated with the United States than American football. It wraps itself in the “red, white and blue.”

The Army/Navy game still has its own weekend after the Power 5 conference championships. The NFL does a Salute to Service every November.

While the rest of the globe celebrates “world football” as the game where you don’t use your hands and scoring is at a premium, American football remains part of the American landscape, whether the games are being played on Friday nights under the high school lights, on Saturday afternoons on college campuses, or on Sundays in professional stadiums.

But as technology shrinks our world, and information is more readily available than ever, American football is hitting a growth spurt for all the reasons it’s loved here in the United States.

“It’s a great way to build bridges between people from various ethnic, religious and political backgrounds. The game also appeals to millennials with the new designs of helmets and shoulder pads, it reminds them of Iron Man or Transformers. And, there are customized cleats, gloves, wristbands, uniforms and face masks — kids love swag,” says Wojciech “Voyt” Andrzejczak, who is the director of international relations and a coach in the Great Stone Gridiron program (China). Andrzejczak has also been a head coach in Poland. “In my hometown of Poznan, Poland, the city supported us because football was perceived as a great way to fight against youth alcoholism and drug abuse.”

Dan Levy, who has coached, run camps, developed clinics or consulted in 10 countries, says he currently coaches in Brazil, where the game rapidly is growing.

“The Brazilians buy in to the culture around American football,” Levy explains. “The pageantry, tailgates, touchdown celebrations — everything that is American.”

Where American Football Is Growing

Not surprisingly, Canada is second behind the U.S. in regard to American football, especially when you consider the annual Grey Cup is the most-watched television show in the country, according to Roger Kelly, the managing editor of American Football International. He also points to the quality of play improving in Canada as younger players flood into the game, as evidenced by Team Canada beating Team USA in a recent U16 game. Outside of Canada, Kelly points to Mexico and Japan as second and third for football due to “strong college systems and good grassroots development.”

John McKeon, the founder and CEO of American Football International, says Mexico is thriving due to its proximity to the United States and fans there having allegiances to NFL teams. Plus, the foundation is strong enough to support a new professional all-Mexican league (Liga de Fútbol Americano Profesional) which held its inaugural season in spring 2016.

As for Japan, the X-League is the top professional league with a strong sponsorship system in place. Due to the sponsorship money, top American players are being recruited by X-League teams, according to McKeon.

Levy previously mentioned Brazil growing at a rapid rate and his claims are backed by McKeon, who reports contact football just started there eight years ago and now there already are 105 contact clubs, plus a federation with 8,500 members.

Andrzejczak says today’s technology is a reason why the sport is growing in Poland and China, where he coaches.

“In the early 2000s, when we were starting in Poland, we were greatly influenced by football movies such as Any Given Sunday and Remember The Titans. The Madden video game series also helps popularize the game, and now the kids who play it know a lot about X’s and O’s, and the rules.”

Also, as soccer continues to dominate interest on an international level, Andrzejczak sees this as a reason why American football is finding more success. He points to “second-love athletes” in countries outside the United States, who grew up playing soccer but never could make it to the next level. Now, in their late-teens and early-20s, these people already possess unique athletic abilities, so as they dedicate themselves to understanding the fundamentals and rules of American football, they have an opportunity to play the sport at a national level.

American Football Not Easy To Learn

For anyone who has coached either a youth team or players who never have participated in organized football, you know there is a significant learning curve to overcome. Athletes not used to a high level of contact have a hard time immediately understanding the power and force of the game.

“In every country I’ve coached outside the United States, the single, hardest fundamental to coach into the players is leverage, particularly in the trenches,” says Levy. “It is just not natural for big guys to bend their knees and drop their hips to try to get lower than one another, especially when they never played football before their mid-20s. It is natural for players who are new to the game to want to stand up high, to see into the backfield and look over their opponents. I have found the best way to correct stubborn fundamental efforts of any kid is to start with the eyes, then work toward the hands and the feet, and the pad level will follow.”

Part of the teaching issue for international coaches is the lack of practice equipment on hand. Levy says there always is access to footballs, helmets and shoulder pads, but equipment like blocking sleds and tackling dummies are not readily available.

Andrzejczak says coaches in foreign countries must import extensively from the U.S., so they are dealing with exchange rates, taxes and tariffs. He says he’s spent plenty of time online looking for surplus sales to help stretch the budget.

Don’t forget, while many U.S.-born athletes started throwing a football when they were young, the shape and feel of a football is different than that of any other ball.

Despite the obstacles, international football programs slowly are gaining when it comes to skills and execution of game plans.

That becomes evident when breaking down games played between American teams and those in other countries. Patrick Steenberge runs Global Football, a group working with American programs to go overseas and play a foreign club, school or national squad. He says he’s been doing this for 22 years and in the first 11, he organized a game between NCAA Division III and Mexican university all-stars. The U.S. won nine of 11 games. But, in recent years, the teams have split the last four meetings.

“Interest in football is increasing here,” says Molteni. “All over Europe, there is growing interest. American football coaches and players come over to coach and play in our local clubs. In recent years, we have organized trips for Division I, Division II, Division III and NAIA programs, and also for select high school football programs. Our mission is to help teams travel overseas, where a common passion for football, along with local culture, impacts the future of all participants.”

This article was written by Michael Austin, contributing writer for AFCA Magazine.