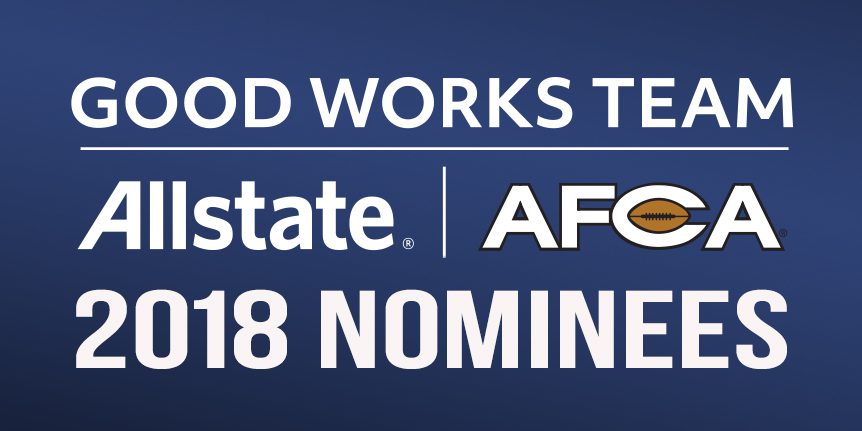 Across America, many college football players receive praise for their superior performance on the field. Today, however, only a select group of those student-athletes have the honor of being commended for their distinguished accomplishments off the field when Allstate Insurance Company and the American Football Coaches Association (AFCA) announce 169 nominees for the 2018 Allstate AFCA Good Works Team®.

“Each nominee has an inspiring story to tell – often times about how they have prevailed over hardships and adversity only to turn around and pour their hearts into helping others.” David Prendergast

The Allstate AFCA Good Works Team® has been one of the most esteemed honors in college football for more than 25 years. The student-athletes who are nominated for this award not only demonstrate a unique dedication to community service and desire to make a positive impact on the lives around them, but they also show tremendous perseverance as well as the ability to overcome personal struggles and come out victorious against all odds.

“Each nominee has an inspiring story to tell – often times about how they have prevailed over hardships and adversity only to turn around and pour their hearts into helping others,” said David Prendergast, president of the Eastern Territory at Allstate Insurance Company and a member of the 2018 voting panel. “It is our privilege at Allstate to come together with the AFCA for the 11th consecutive year to shine a light on these exceptional nominees who set the highest standards of community service and serve as role models for generations to come.”

The college football players who have been nominated make it a priority to find time in their busy schedules to volunteer in meaningful ways. Of the nominees, many players dedicate time to reading, mentoring and playing sports with disadvantaged children when they are not in the classroom or on the field. Other players make frequent visits to hospitals to spend one-on-one time with ill patients. One student-athlete even went as far as donating bone marrow in order to save the life of a child in need.

“I’ve seen the value of this team firsthand since I was selected as a member of the Allstate AFCA Good Works Team my senior year, and I love seeing the influx of players year after year who truly embody everything this program stands for.”Tim Tebow

“I’ve seen the value of this team firsthand since I was selected as a member of the Allstate AFCA Good Works Team my senior year, and I love seeing the influx of players year after year who truly embody everything this program stands for,” said Tebow. “These kids have so much character, strength, and honor. To excel on the field, in the classroom and be a leader in community service – that is the ultimate accomplishment.”

The Allstate AFCA Good Works Team® is comprised of 11 players from the NCAA Football Bowl Subdivision and 11 players from the NCAA Football Championship Subdivision, Divisions II, III and the NAIA and one honorary head coach. To be in consideration by Allstate and the AFCA for a nomination, each player must be actively involved with a charitable organization or service group while maintaining a strong academic standing.

The final roster of 22 award recipients and honorary head coach will be unveiled in September.

“There are always a lot of great stories that come out every year during the college football season, but none of them compare to the inspiring stories that each of these Allstate AFCA Good Works Team nominees live out on a daily basis,” Todd Berry, AFCA Executive Director said. “How these student-athletes spend their time helping others should be a motivation to everyone who reads about them to give back. It’s an honor to partner with Allstate to publicize the great works these student-athletes achieve each year.”

After the final team members are announced in September, college football fans can visit the Allstate AFCA Good Works Team® official page on ESPN.com to view profiles and images of the players and honorary head coach, and vote for the 2018 Allstate AFCA Good Works Team® Captain. Fans are also encouraged to follow along and join in on the conversation by searching and using #GoodWorksTeam on their social media channels throughout the season.

The following players have been nominated for consideration to be named to the 2018 Allstate AFCA Good Works Team®:

The Allstate AFCA Good Works Team® was established in 1992 by the College Football Association, recognizing the extra efforts made by college football players and student support staff off the field.  AFCA became the governing body of the award in 1997 and continues to honor college football players who go the extra mile for those in need.  Allstate worked to present the award starting with the 2008 season.