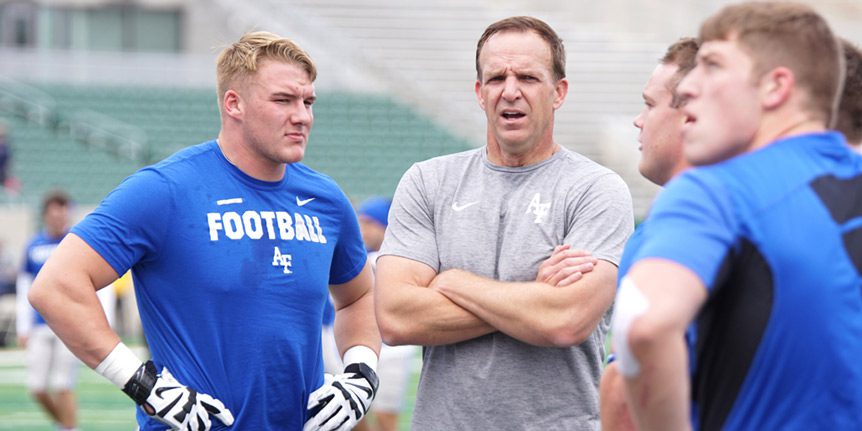 Perhaps no coach in America has experienced the extreme opposite poles of football culture quite like Troy Calhoun.

One minute, Calhoun was highly regarded as a hot NFL offensive coordinator and quarterbacks coach with the Houston Texans (2006), who spent time as an assistant to the head coach with the Denver Broncos (2005) and had incredible success in college football as offensive coordinator at Wake Forest (2001- 02). At that period in time, Calhoun was widely considered one of the NFL’s up-and-coming offensive minds.

The next thing he knew, Calhoun was unexpectedly overcome by the pull of a former love in desperate need. An entity he still felt deeply attached to, the calling triggered passion he felt embedded in his very DNA. It was a call for help he could not resist.

So in 2007, Troy Calhoun accepted the job as head football coach of the U.S. Air Force Academy in Colorado.

The Air Force Academy was a place Calhoun knew well. Both he and his younger sister are graduates of the academy, where both excelled academically and athletically in their time as academy cadets.

Calhoun’s had a terrific run of success at the Air Force Academy. Looking back, Calhoun says the transition was much harder than he thought it would be. After the years he spent coaching in the NFL, coming back to the culture of Air Force Academy sports was a bit of a shock to the head coach.

“Coaching in the NFL, and then becoming head coach of the Air Force Academy was more than a little bit of a 180-degree turn,” says Calhoun. “It’s akin to the difference between noon and midnight.

“The Air Force is my true passion and I love coaching here. But the beautiful thing about coaching professional football in the NFL is that you have a completely level playing field from which you can build your team.

“In the NFL, everybody has the same salary cap, the same roster size, utilizes the same system that is in place to draft collegiate talent and everyone abides by essentially the same code of conduct. NFL football is ‘even-steven’ all the way.

“It is what makes the NFL the incredible league that it is, and an amazing coaching environment to work in – it’s competitive and there’s tremendous parity.”

According to Calhoun, the major difference-makers for NFL coaching success stem from things like work ethic, creativity and finding other ways to be resourceful. Thee coach adds that focusing on those attributes can overcome the physical parity of the pro league and can help you win more games.

Recruiting athletes to play college football at the Air Force Academy is a challenge. The Falcon’s academic standards rival non-scholarship Ivy League schools or a school like Stanford University – with the caveat of a 5-year commitment to serve your country as an Air Force officer upon graduation. It takes a special young athlete to want to play football for the Air Force Academy.

“First off, it’s tough getting into the Air Force Academy,” says Calhoun. “So when we recruit potential candidates as football players, the first thing we look for is a student-athlete with exceptionally strong academics.

“Potential Air Force Academy recruits need at least a 3.5 GPA with a 25 ACT or a 1200 SAT score in two parts, math and critical reading.

“In their first 40 days in the academy, they get up at 4:30 am every morning and go through basic training – where there is not a football involved.”

Calhoun says that only covers some of the requirements that a cadet needs to commit to. Other aspects of Air Force Academy life, such as wearing a regulation uniform every day, being clean-shaven, wearing your hair cut short, having no piercings or rings – are all mandatory things that potential recruits must be willing to do, just to remain at the academy.

Despite his success at the Air Force Academy, Calhoun says he made some classic coaching mistakes when he first took over the program. One area in particular he cites as poor decision-making was in selecting a style of play that he wanted to run, rather than implementing schemes that best fit the Falcons’ personnel and athletic situation.

“I came to Air Force wanting to utilize the offensive system I had previously used with success in the ACC at Wake Forest,” says Calhoun. “In 2002, during my time as offensive coordinator, Wake Forest averaged 408 yards-per-game offensively. We ran a league-best 990 plays and only had 16 turnovers that year.

“The thing I was most excited about, though, was to add-in some of the offensive concepts we had used during my time with the Denver Broncos and Houston Texans in the NFL.”

Calhoun says it wasn’t long before he realized that there were some big differences in the athletes he had on his roster – especially when it came to size and movement issues – which made it tough to implement the offense as he had envisioned.

“It became clear that the physical limitations in athleticism would hamper our ability to execute the offense,” says Calhoun. “On top of that, we also had restrictions in the time we had available for team meetings, which I had not anticipated.

“In terms of available meeting time, at the Air Force Academy, we have 90 minutes to practice and 45 minutes to meet – which wasn’t long enough to cover all the concepts that I wanted to teach.”

The more the Falcons’ coach thought about it, the more he realized that his NFL coaching days had spoiled him.

“In the NFL, we had all-day practices, extended team meetings, post-meeting walk-throughs, and then the coaches would all meet at night for hours on end to talk about the day’s work and plan the next day,” he says.

“So here I was, trying to implement those same NFL pro-level offensive concepts into an Air Force football program that operated on limited practice time. e Air Force Academy has higher priority matters that come before football practice.”

Calhoun says it’s a lesson to all coaches who take over a head coaching position with a new team. “You must learn and quickly adapt to the structural differences in an organization when going from one football team to another. I learned that lesson the hard way,” he says.

Despite the mistakes early in his Air Force Academy head coaching tenure, Calhoun eventually found his groove. The Falcons’ coach says that the formula for success relies on several key strategies.

“The reality of my situation set in when I realized that we had an offensive line that was the lightest in all of college football,” says Calhoun. “With an average weight of 250-pounds per offensive lineman – we decided to make some adjustments.

“Over time, we learned we could implement offensive strategies to create openings that would allow and encourage certain 1-on-1 pass rushes to be used – whether it’s with offensive guards getting bull-rushed or when we face defensive tackles who are quick getting off on edges and we need an offensive tackle who possesses a little more length – we developed counters to all those.

“Suddenly, things that appeared as on-field weaknesses that opponents wanted to attack, we used to exploit and counter- attack from a play-calling and game-planning standpoint. In other words, we’ve learned to be creative.”

Calhoun says that a critical component for success is a need for his offense to be an efficient passing team year-in and year-out. As such, a primary goal for the Falcons each season is to be ranked in the Top 20 in passing efficiency.

“To compliment our efficient passing game, we feel as if we always need to have a 1,000-yard rusher in our backfield, preferably a tailback,” says Calhoun. “ is allows us to run downhill and utilize both inside-zone and outside-zone, with a good mix of gaps and power plays.

“We feel that the efficient-passing/1,000-yard tailback combination allows us to play at a pace where we dictate the tempo of the game. Since 2007, we’ve had a 1,000-yard rusher in 5 out of 7 seasons.”

The Falcons’ coach says it’s also important that his offense use a good combination of shotgun and under- center formations, as well as have the ability to mix tempos, depending on situations, and either speed up the rapidity of the play calls or slow it down if need be.

“We strive for flexibility within everything that we do and try to be very current about everything we do from a strategic standpoint,” says Calhoun. “We need to have an intimate familiarity with our opponent’s personnel and tendencies.

“All of that information is critical when you’re physically out- matched and facing size disadvantages each week, like we do.”