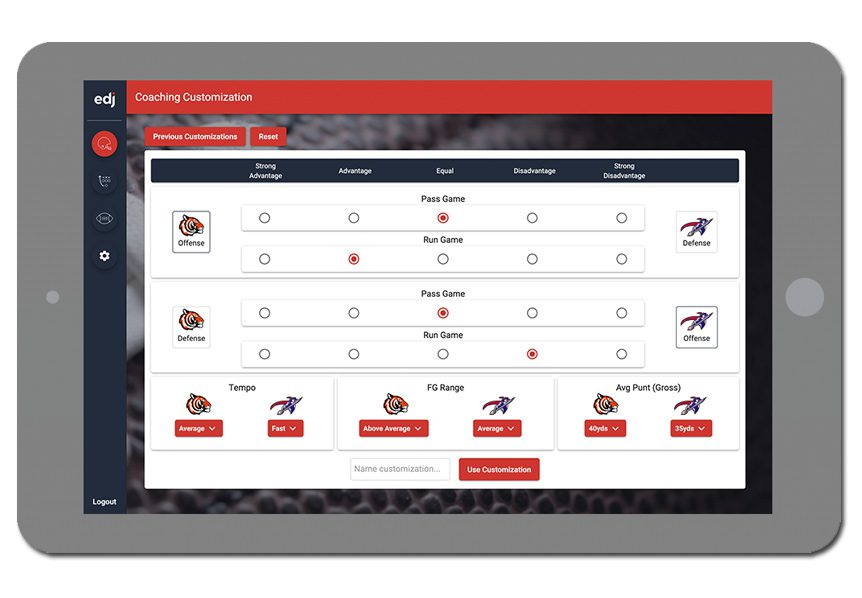 EdjSports, the same company trusted with providing advanced analytics for the Philadelphia Eagles Super Bowl Champions, released an advanced analytics platform specifically designed to meet the needs of the high school football coach. This new platform, EdjVarsity, provides coaches with invaluable tools to predict how each decision and play call will affect their team’s probability of winning any given game.

Coaches understand the value of traditional analytics — looking for trends, tendencies, strengths and weaknesses in a given opponent, as well as within their own program. This certainly gives a staff worthwhile context as they prepare each week’s game plan, but it doesn’t offer much assistance when they face tough in-game situations with little time to react.

The advanced analytics provided by EdjVarsity opens up a whole new world for high school coaches within these scenarios. The tools included in the platform aren’t based in the past, but rather, are forward‑facing, adaptive and readily available to coaches in real time.

“ EdjVarsity has changed my definition of ‘analytics.’ I’m excited to bring this easy-to-use and cutting‑edge technology from the NFL to Mater Dei.”Dave Money, Offensive Coordinator, Mater Dei (Calif.) High School

One of the most eye-opening elements of the platform is the Fourth Down Forecast.™ This tool allows coaches to input any game situation and see how each of their options on fourth down — punting, trying a field goal or going for it — will affect their chance of winning the game.

For example, the Fourth Down Forecast may show a coach that they have a 10% higher chance of winning the game should they go for it on fourth and three, as opposed to punting. With that information, coaches can be more aggressive on first or second down, and may be more willing to take what the defense gives them on third and long, knowing that if they‘re within three yards of moving the chains, they’re going for it on fourth down anyway.

Another element of the advanced analytics platform, the Play Call Simulator, offers the same in-game insight as the Fourth Down Forecast, but can also be used before or after a game to provide objective evaluations about what play to call in any given scenario — giving coaches valuable mental reps and elevating their play-calling proficiency.

“It’s a full simulation tool,” explains Frank Frigo, co‑founder of EdjSports. “It’s great as a preparation tool to look at any hypothetical situation, but coaches can also do a much deeper dive after the fact on situations they encountered during a game.”

“The value of points in terms of how they impact win probability changes dramatically during the course of the game,” Frigo says. “That’s a difficult dynamic to keep up with on the sideline, but the Game Book does a fantastic job of capturing when aggressive actions are warranted so that coaches don’t have to.”

Coaches are always looking for a competitive advantage, and it’s hard to overstate the power of having advanced analytics on your sidelines. Opposing coaching staffs will have to work overtime this year, trying to predict the tendencies of coaches who are equipped with this revolutionary tool — making EdjVarsity customers some of the most intimidating teams on anyone’s schedule.

For more information about the EdjVarsity platform, visit www.edjvarsity.com or call (502) 208-4088.