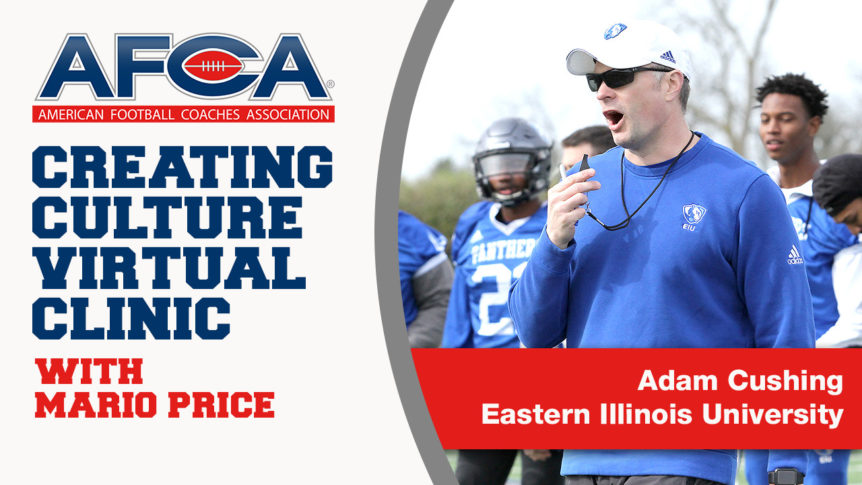 The head coach at Eastern Illinois University, Adam Cushing, presented a virtual clinic on the process of creating culture. During the clinic, Cushing provided fellow coaches with a transparent outlook on overcoming first-year failures in creating consistent culture within the program at EIU.

Prior to taking over at EIU, Coach Cushing spent 15 years at Northwestern University, coaching with Randy Walker and Pat Fitzgerald. The experiences gained there, as well as the other places Cushing has coached helped shape his perception of what culture should look like. Before becoming a head coach, Cushing spent years and countless hours planning the culture he would create whenever he did step into this role. When he arrived at EIU, Cushing was excited about the opportunity to build the culture and do so with a structured and linear approach that was comparable to other institutions. However, a record of 1-11 in his first season as head coach at EIU caused him to rethink his methods.

“The problem is the ideas don’t matter without the follow-through or constant feedback and interaction with the players,” said Cushing. “I was a first-year head coach and I justified that lack of follow-through by [saying] ‘I got all these balls in the air I’m juggling, and I’m negotiating lots of challenges and I’m trying to get a handle on all of this.’”

Coach Cushing described a change made to help alleviate the mismanagement and lack of follow-through on ideas. In the second year, the coaching staff and leadership council went back to the basics, where they talked about living day to day life appropriately. They also created a pyramid for success, something they thought would help everyone in the program become aligned with the same goals. This pyramid included characteristics such as attitude, discipline, trust, sacrifice, excellence, belief, etc. Little did they know, this pyramid would still need to be stripped down to the four foundational principles.

At the conclusion of the season, Coach Cushing had his staff fill out independent surveys that asked for three things that defined the vision of the program. He elected to utilize independent surveys because sometimes the concept of groupthink sets in and guys start to verbally agree with what is being said even if they don’t fully agree internally.

“My heart truly broke as I read those [surveys] because guys didn’t know. Guys didn’t know what my vision was and what our vision was, we weren’t unified,” said Cushing. “The players also had some issues with the consistency and trust from player to player and player to coach.”

This prompted Coach Cushing to clarify and simplify. He said that his responsibilities are to provide clarity of vision and then to hold the coaches accountable to that vision. In response to simplifying these responsibilities came the stripped-down pyramid to the four foundational blocks for the program. These include passion, attitude, investment, discipline (P.A.I.D.) because they are what will help the program be successful. Based on these blocks the coaching staff can create goals for the off-season.

The Panthers create connection through “lesson plan Fridays” with masculinity talks, life graph illustrations, and truth exercises. They also create connection through “real world Wednesdays” and “weight room communication.” Next, Coach Cushing and his staff create a competitive spirit through “Panther Games” and fun competitions. Finally, the coaches and players are able to stretch their best because failure is now encouraged, and trust is required.

Coach Cushing has truly grown and transformed the EIU program since taking over as head coach. The development that his coaching staff and players are gaining is inspirational and certainly bigger than football. He has taken the approach to support the development of young men beyond the football field. Whether it is discussing life at home, teaching the players how to tie a tie, or empowering them to be the best version of themselves, Coach Cushing and his staff are making a difference in countless lives.

Q: How do you recognize the culture you need before you walk into a job?

A: The culture needs aren’t necessarily different, but the teams are in different places. Teams don’t happen without trust or connection. The first thing that any team needs is the idea of connection to one another.

Q: The independent surveys are a great idea. Will you continue to give the same survey each year?

A: Yes, I will make sure that I share the exact same questions with our coaching staff and players each year.

Q: What do you think was the biggest lesson you learned as a first-year head coach?

Q: How do you teach your staff to follow and echo your vision?

A: Hire people you know and can trust that have the same core values as you. Follow that up with creating ownership and being present for your guys.

To watch Coach Cushing’s Virtual Clinic, along with numerous other videos, please log in to your AFCA membership account and search through the AFCA Educational Library.