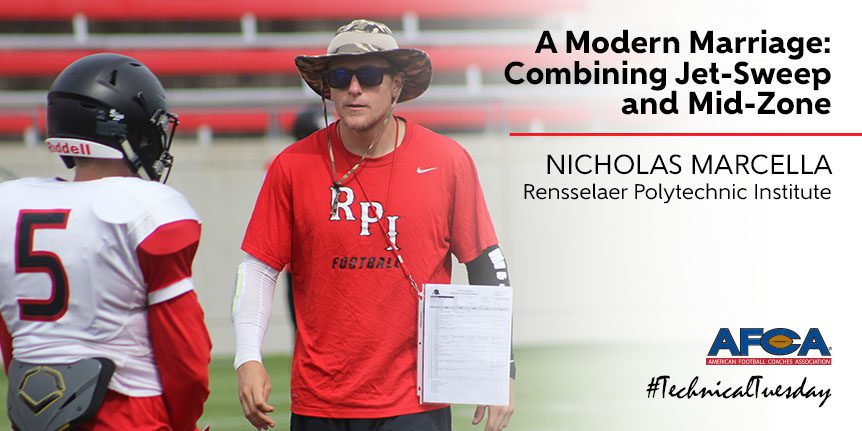 When looked at from a distant vantage point, RPI’s offense is the muddled love child of Oregon and Army. We are a multiple spread team that focuses on triple-option principles, but has been tailored to accommodate the strengths of our student-athletes. For example, in years one and two of Coach Isernia’s offense, the strength of the team was assignment football utilizing veer out of the gun. Year three saw the Liberty League’s Offensive Player of the Year at quarterback, lending the offense to be more of an RPO and Air Raid team. In 2016, with a stable of both tailbacks and slotbacks, and inexperienced quarterbacks, the run game was the focus. The Jet-Sweep/Mid-Zone (JMZ) play has been the constant in this ever-adapting offense.

The players at RPI always want to know, “Why?” There has to be a rhyme or reason to everything. They are future engineers after all. To answer this question in the most simple of fashions, Mid-Zone (MZ) can be run against any defense. Oftentimes we do not know what front or how the defense will line up to our multiple formations. MZ gives us a safe play that we can run out of anything, our players just need to execute their rules. Here are some more reasons to that pesky “Why?” question:

MZ is the perfect tempo play. Tempo is the name of the game these days, and this play lends itself to going really fast or really slow. We utilize both tempos, sometimes in a play series of two consecutive plays or after multiple check-with-me calls. It can be run regardless of front or if the defense misaligned due to tempo.

In 2016, we lined up in over 40 formations. Yes, 40. Jet-Sweep/Mid-Zone (JMZ) is the only play that we can run from EVERY set. That means defenses need to prepare for it with three unbalanced linemen, doubles, unbalanced wide receivers, two tight ends, 30 personnel, and even Empty sets. The ball carrier can be a receiver, a slotback, a tailback, or the quarterback, making it a difficult concept for the defense to key in on. Jet-Sweep/Mid-Zone (JMZ) has also given our offense another viable option on what would be seen as conventional Screen-Draw downs. The late jet motion is difficult to adjust to and we keep numbers playside.

There is little to no new teaching for our offense. We run it the same as a basic outside zone scheme. You do not need both! It can hit inside or outside based on the blocks. There is no new teaching for the skill guys getting the ball. Their action key and rules remain the same regardless of formation, ball carrier, or personnel group. The ball carrier and the lead back will read the offensive end man on the line of scrimmage’s block. (Diagram 1) For the offensive line, block up your outside zone. This includes a tight end if he is attached. We will aggressively reach to our playside gap. If we do not get the reach by the third step, the offensive line MUST switch their reach block to a drive block. This creates natural cutback lanes for the ball carrier to make them right.

We use a basic covered/uncovered for the offensive line’s rules. If an offensive lineman is covered, his aiming point is the outside number of that defender. If uncovered, the offensive lineman will look to help playside gap or sift/climb vertical. The key difference from a base outside zone scheme is letting the center/backside guard combo work back. We found that our center (not the most fleet of foot) was often chasing a ghost in the playside linebacker on outside zone. Allowing him to work back creates a huge cutback lane and segments the defense. We utilize a lead back to get the playside linebacker. Diagram 2 shows the lead back’s rules. In Diagram 3, we start our back in motion and look for him to stretch the edge in his first three steps. The first step in motion is critical. Coach a wide, powerful step that opens the hips and points the back’s toes towards the quarterback’s toes. This can be executed from a basic wide receiver stance as well. Once he has the ball, he reads the end man on the line of scrimmage’s block, in this case, the tight end’s block. The offensive line and the attached tight end are on their zone scheme, aggressively reaching playside. The center can work back if he is bumped off. The perimeter players have the man on or above them, unless tagged otherwise. You can see in Video 1 that the tight end and playside tackle get a great horizontal push by attempting their reach. The ball carrier would not have been incorrect by taking this outside, as the tight end does a pretty good job on the reach. The tailback is also correct as he is blocking the play in the same way he would if he was the ball carrier. The beauty of the play is trusting the scheme, as the ball carrier knows the center will be peeling back. The defense flows heavily, the back sees color flash and cuts back to pay dirt. The back does a great job of making his decision on his third step, and even though he may not have made the correct decision based on his rules, he made a decision.  It is always better to be decisive than right. If you pause the video around the four-second mark, you can see how the defense has segmented dramatically.

The play in Video 2 is very similar to the first video. The playside tackle and slot do not get the reach, but they get horizontal push. The key for the back is simple and he makes a great decision. For a back not in motion, the three-steps-to-and-three-steps-through technique is often a difficult one. The jet motion causes their momentum to push out at least three steps naturally and marries up perfectly with the mid-zone’s stretch action.  Because this action causes great flow, it is a perfect concept to RPO off of, or to pull up and hit quick game routes to the side the motion originated from. (Diagram 4) We are in an empty set presenting the defense with a pass heavy look in Diagram 5. The lead back is now in an empty wing position. He still has the playside linebacker, whichever way he goes. From the backfield, he will block on the same path he would run with the ball on a traditional outside zone. In this look, with his alignment and the outside linebacker’s adjustment, the lead back’s block is easily defined. Nothing has changed schematically despite the different look presented.

The playside tackle does a great job of sealing the end and making the read very clear for the ball carrier in Video 3. The ball carrier knows he is outside even before his third step here. The lead back still has the playside linebacker who aligns outside of him. He gets a two for one here on his cut, and we are out the gate.  The playside wide receiver does a great job of recognizing man coverage and the runs of his defender. He finishes strong and seals the sideline for the back.

In Diagram 6, we line up in an unbalanced set. The defense does not overadjust to the unbalanced set, so we have a numbers advantage. Had they overshifted, we would check the play in the opposite direction.

Our playside tackle does not get the reach in Video 4, forcing the lead back to cut inside and the ball carrier to follow him. With that said, the tackle does get horizontal displacement. The lead back still has the playside backer and is correct here, but should be leading up sooner, reading the tackle’s block as the ball carrier does. The ball carrier makes his choice by his third step and chooses to bang. Those three lateral steps adjacent to the offensive line are crucial in inducing linebacker flow and creating cutback lanes.

We are going to run Jet-Sweep/Mid-Zone (JMZ). The defense knows we are going to run it, and despite our fluctuating economy, the other staff has chalk/markers as well. Because the play is relatively simple, we have dozens of tags and variations that we can utilize.

Having trouble getting the edge against a tough defensive end? Send the play-side slot/tight end on a double team with the tackle. Teams overloading the formation strength? Check the play weak and utilize unbalanced or 3×1 sets.  Overaggressive defense? Play action, reverse, counter, inverted veer off of the same action. The best part about these variations is that they change something for only a few players.  Here are some variations we run off of the action:

The Jet-Sweep/Mid-Zone combo is also great for play action as the motion demands a lot of eye attention, and where the backs end up provides the offense with a 7-man protection.

The key to MZ’s success is displacement. We would all love to have 6’5″, 350lb offensive lineman driving the defense down the field, but it is rare to have such a luxury. Instead of vertical push, MZ needs horizontal push. Focus on coaching the aggressive or reckless reach block. Football 101 for defensive lineman in Pop Warner says, “Don’t get reached.” This applies at all levels of ball. With that aggressive reach, the offensive lineman either creates a clear outside running lane, or new gaps inside for the cutback.

For the combo of the center and guard, the defensive alignment post-snap is more important than pre-snap. If the center is not bumped off by the guard, then stay on your man! If a 1-technique attempts to cross the center’s face hard, the center should stay on and the path to the backside linebacker should be clear for the guard. The first level is the most important level!

Jet-Sweep and Mid-Zone are great plays on their own. Combining them makes both plays more dangerous with half of the teach time. Jet-Sweep/Mid-Zone (JMZ) threatens the edge and perimeter defenders, while taking advantage of aggressive defensive interior flow. This play has also been great against pressure because the backers are accounted for by the zone blocking scheme and the lead back, and we are often running away from the pressure side.

A phrase my college coach used to say was, “The pass game is like science. Too much or too few of a certain element can cause stuff to blow up in your face.” He was referring to missed timing with the receiver and the quarterback, an incorrect route, or an errant throw causing a pass play to be unsuccessful. He also said, “The run game is like art. Sometimes you throw a bunch of stuff on a canvas and it becomes a priceless artifact.” This play has a certain element of self-correction on the run because of the options presented to the ball carrier. There is so much a team can do off of the action and it has become one of our best plays.  I hope it can be one of yours as well.

Nicholas Marcella is currently the running backs/pass game coordinator at Rensselaer Polytechnic Institute. Marcella joined the Engineers staff in the summer of 2015. He came to RPI with experience coaching wide receivers at various camps and clinics, including the Paul Pasqualoni Football Camp at the University of Connecticut, as well as the Elite New England Football Camp in Massachusetts. Marcella was also selected to be part of the 2017 AFCA 30 Under 30 Coaches’ Leadership Institute.

A Saint Anselm College graduate, Marcella was a four-year wide receiver at his alma mater, playing 33 games for the Division II Hawks. He caught 69 passes for 624 yards and a touchdown from 2011 to 2014, with his best statistical season coming the last year when he had 42 receptions for 405 yards and a score.