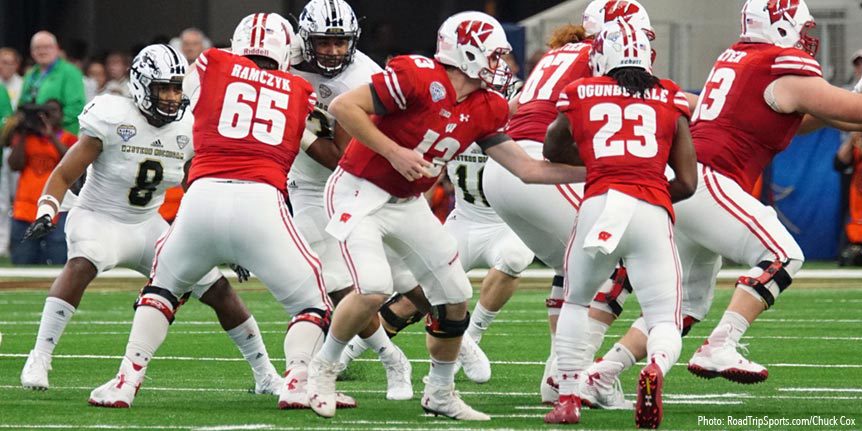 You can improve the speed, quickness and directional movement of your offensive linemen with the following five agility drills. This dot drill will improve an offensive lineman’s agility and foot quickness. Paint 5 dots on the ground approximately 2 feet apart in the shape of a square, with one dot in the middle of the square.  While there are a number of dot drills athletes can perform, we’ll provide you with the steps for the Double X Dot Drill.

Jumping rope is the best way to develop quick feet for an offensive lineman. It is important to find a rope that will fit each individual lineman due to various heights. Never have them jump flat-footed. Have them stay on the toes, which allows for more spring and control.

Place four cones 10 yards in width and 10 yards in length; they should make a square. Have the linemen start from the right corner (cone 1) in a proper 3-point stance.  On a count (always give a snap count) each linemen will sprint from the first cone to the second cone, make half a turn and carioca from the second cone to the third cone. Make sure each lineman stays low and is quickly taking many steps while rotating the hips.

The objective of low bags or agility bags is to improve the foot quickness of offensive linemen and to teach them to keep their pad level down when changing directions. Lay six low bags approximately 2 feet apart on the ground. Have the offensive linemen line up in a straight line starting in front of the bags in a 3-point stance. Always give a snap count.

Lateral steps: Each lineman will turn sideways 45 degrees with the point of the inside shoulder facing the bags. Have them run laterally over the bags without crossing the feet over.  Have them pump their arms pushing off the outside foot and kicking the inside foot over each bag.

Twist: Each lineman will turn 45 degrees with the point of the inside shoulder facing the bags. Have them run laterally over the first two bags. Then they will turn 180 degrees between the second and the third bag and run laterally. Then have them turn back 180 degrees between the fourth and fifth bag and they will run laterally completing the drill. When they turn, it is one continuous motion. Do not have them stop their feet when making the turns.  They are also pumping the arms.

Side-to-side: Each lineman will face the bags taking wide and quick lateral steps weaving in an out of the bags.  The feet should not cross over when changing directions.

Hops: Each lineman will face the bags and hop over each bag keeping the feet together.

Two feet: Each lineman will face the bags and pound two feet in each hole.

For every drill you teach, it is important to have each linemen finish the drill with a 5-yard burst. Finish the drill by having each lineman with his outside foot over the last bag driving up field for 5 yards.  Allow space between each lineman by letting offensive linemen pass the fourth bag before the next o-linemen starts.