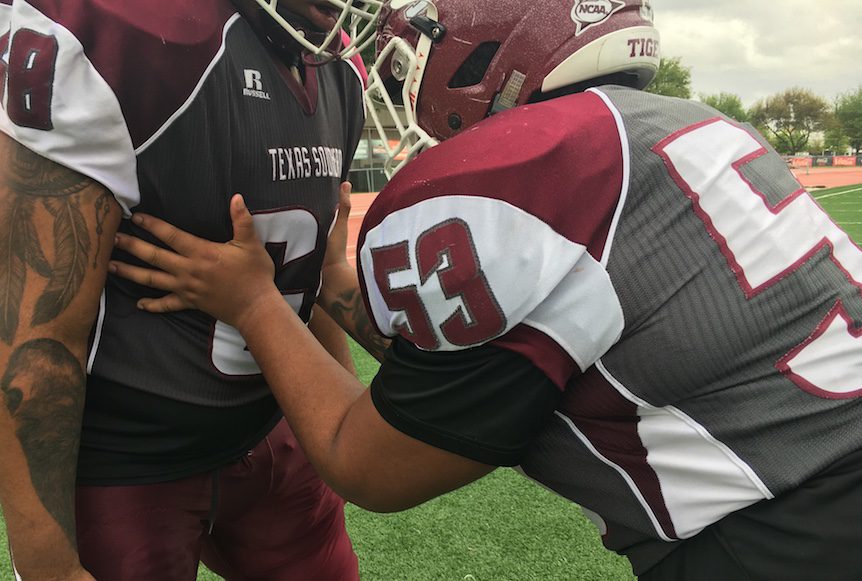 If offensive line play was taught by professors at universities instead of football coaches, the math and science departments would be hiring. The game of football has a direct correlation to geometry and physics through the simple principle of LEVERAGE. Leverage, in football terms, can be simply defined as putting one’s self in a dominant position over an opponent. When developing offensive linemen, there are three types of significant leverage that these athletes need to learn and master. These three types of leverage are body, hands, and point of attack. By fully understanding these three facets of leverage, an offensive lineman can put his body in the best position to be successful and in the most powerful position of dominance over his opponent.

Leverage of the Body

Many coaching points over the years have been yelled ad nauseam in terms of leverage of the body. “Get your pads under pads!” “Fire off with a flat back!” “Get your Z’s in your knees!” “Hit on the rise!” What do these points really mean? Ultimately, when an offensive lineman is in a true position of power over the defender, he has his center of gravity lower than the defender’s and his shoulders are above the knee to mid-thigh area (forward lean/fit) with the glutes tucked and engaged. (See picture 1.) He can have a “flat back” with high hips and not be in a position of power. He can have his “pads under pads” and be far out in front of his knees and not be in a position of power. By maintaining a lower center of gravity and optimal forward lean, the offensive lineman can strike and lift his opponent causing him to unlock his ankles, knees, and hips. If the physics professor was running your individual, he would be able to teach that straight lines have support but no power, and that angles have power but limited support. When unlocking a defender’s ankles, knees, and hips, you are causing the defender to have straight lines in his lower body. Those straight lines can keep him upright and support his own weight, but they do not have the power to fight the pressure of an offensive lineman. Inversely, by maintaining angles in his lower body and lower back, the offensive lineman is playing in the most dominant leverage position over the defender. In terms of training this position of power, it is just as important for them to know what position to not be in as much as it is to focus on the ideal fit. The simplest drill I have found to relay this message is the Head Pressure Drill. First, have the offensive lineman bend at the waist with limited bend in the knees and head down. The scout will apply pressure to the back of the lineman’s head with both hands. The lineman will then try to stand upright fighting that pressure. (See Picture 2.) They will instantly notice how difficult it is to regain the upright posture because they are not incorporating the large muscle groups of the lower body and core. This phase of the drill is to educate the oh-so-dreaded “waist benders.” These types of blockers never play from a position of power for two reasons: 1) they do not incorporate the glutes and core stabilizer muscles, and 2) their center of gravity is too high and far behind them.

To counteract this and educate them on the optimal position of power, the next phase of the drill is to have them squat down as if they were in a squat rack. Their whole foot will be in the ground, flexion in ankles, knees, and hips, and curvature of the spine with a proud chest. The scout will then apply pressure to the top of the head with his hands as you command the lineman to stand up. The offensive lineman will instantly feel less resistance because he incorporated all the major muscle groups into the action of standing upright verses resistance. (See Picture 3.) Just as the natural science professor would tell you, before a snake strikes, he coils his body so that he can uncoil it with as much violent force as possible. The offensive lineman’s stance must be one where he can coil and unload into that violent fit. If an offensive lineman cannot jump high into the air from his stance, he is not loaded enough in the hips to be able to violently uncoil into the optimal leverage position. RELATED CONTENT: Always Revert Back to Your Training: Keys to Offensive Line Preparation

Leverage of the Hands

All of the training in the world of uncoiling hips will be in vain if the offensive lineman does not use his hands to unload the momentum that his lower body generated. When understanding hand leverage as an offensive lineman, there are three simple things to keep in mind – tighter, lower, and tucked elbows. Offensive lineman need to tuck their elbows to the side or front of their body to lock their upper body into their core for stabilization and to incorporate the large muscle groups of the upper back, lats, and traps for power. Unless it is 1950s pass protection, there is absolutely no reason for an offensive lineman to have tight hands and wide elbows. Just as a crowbar is used to open a door, the further the hands and elbows go outside of the body, the greater lever you are giving the defender to be able to turn your shoulders and dictate where your hips will end up. Many have heard the phrase “punch with your thumbs up.” The goal of this coaching point is to ultimately get the elbows to tighten to the body. Unfortunately, the body will still let you punch with thumbs up and elbows out. (See Picture 4.) When the forearms are supinated, the elbows naturally track along the rib cage. The best coaching point I have found to gain this ideal posture is “pinkies out.” (See Picture 5) When the pinkies are turned outward, the forearm naturally supinates and gives you the best chance to have tight hands inside with the strongest upper body base. The first drill is the Lever Drill. This will focus of the defender using your lever against you the further your arm leaves the framework of your body. First, have the lineman bend his knees into an athletic position and have his hand stretched outside the framework of his body. The scout will then apply pressure to the hand while the lineman fights his shoulder from turning. (See Picture 6) The lineman will notice that the farther that hand is away from the body, the easier it is for the scout to turn him. Next, have the lineman assume the same position and tuck the elbow while pronating the forearm (pinkies out). The scout will then apply pressure to the hand trying to turn the shoulders of lineman. (See Picture 7.) The offensive lineman will instantly notice his second posture makes it easy to maintain and sustain against the force because he incorporated large muscle groups and the stabilization of his core. Leverage to the Point of Attack

Point of attack leverage can be simply described as the old adage of “keep your butt between the defender and the ball carrier.” An offensive lineman must understand that all eleven defenders are trying to attack the football, and he must know where it is at all times. Whether it be an inside leg of the play-side guard landmark on inside zone, or a seven yard launch point behind center on drop back protection, every offensive football play has a point of attack. In truly understanding the point of attack on any scheme that the play design has, an offensive lineman has to know if he has, or does not have, leverage to the point of attack in the defense’s pre-snap alignment. If an offensive lineman has pre-snap leverage to the point of attack, he must maintain and sustain that position of power. In Diagram 1, you will notice that the play-side tackle has a pre-snap leverage alignment on the defender to the point of attack on a tight zone play. By understanding that the ball is going inside of him, he knows which areas can hurt him, so he can favor against it. For example, if the play-side tackle were to take an outside aiming point landmark and the defender that he is responsible for gap slanted inside, he ultimately would have given up his pre-snap leverage alignment. If the tackle took a tight angle of departure t0 the defender and he the defender slanted inside, he would be in a position to maintain his leverage. The offensive line position is one of acquired skills and tools. When developing offensive linemen, it is critical that they understand the leverage they need to be in to be successful on a given play. If they keep their center of gravity lower, elbows and hands tighter, and their body in between the defender and the ball carrier, they will then learn the three types of leverage needed to dominate their opponent.