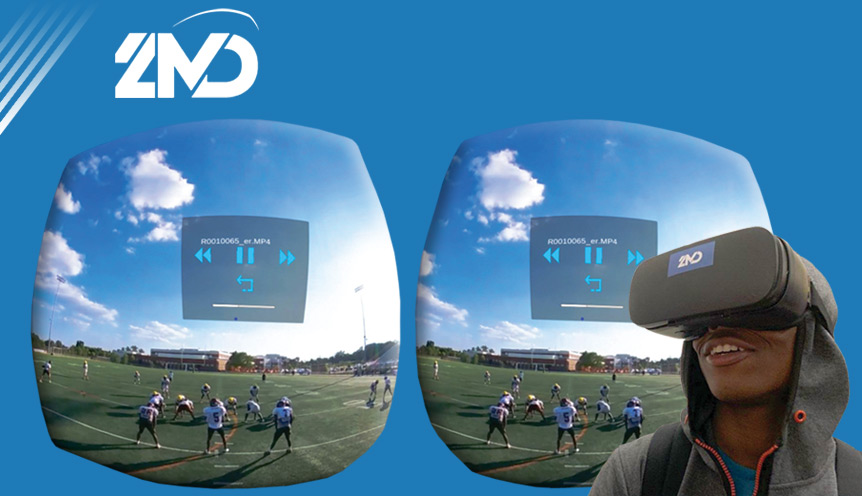 Getting as many quality reps as possible presents a big-time challenge to coaches across the country. And what about turning a high percentage of those reps into coachable moments?

Well, that’s nothing more than a pipe dream right?

Michael Nesmith, the head football coach at Paint Branch High School in Burtonsville, Md., doesn’t think so. He’s armed his players with a new tool for taking their game to the next level, and it might be coming to a program near you soon — virtual reality.

Two years ago, a sophomore quarterback joined the Paint Branch team at the start of summer practices. While the young man seemed to possess all of the physical characteristics and intangibles Nesmith was looking for in their next starting quarterback, his play left a lot to be desired.

Then Nesmith started incorporating 2MinuteDrill virtual reality training into their film study, and the results were astounding.

Inside the 2MinuteDrill headset, Center perspective:

In two seasons as a beneficiary of this technology the once-struggling young signal caller led Paint Branch to a 20-4 record and earned himself several full-ride scholarship offers. As Nesmith puts it, “He’s not paying a dime for college.”

So how exactly does a player go from someone who just doesn’t have the skills to be a starter in high school to garnering serious interest from major colleges. Certainly the addition of virtual reality film study doesn’t account for such a drastic improvement by itself right?

Nesmith acknowledges that hard work in practice, hitting the books, max effort in the weight room, listening to coaches and being a great teammate all played a major role. But using 2MinuteDrill proved to be an x-factor, that much is undeniable.

“He embraced the virtual reality technology every time, and he improved so much,” Nesmith says. “He’s narrowed his choice down to Bowie State or Charleston.”

Adding virtual reality to your football program isn’t as complicated as it may seem. 2MinuteDrill works by setting up a camera at the chosen position’s vantage point, and recording directly to the coach’s smartphone. Once the footage is captured, coaches upload the footage to the 2MinuteDrill Dashboard, where they can enhance the footage to desired specs, overlay graphics and text boxes and then share plays with the team.

An example of using graphics inside the 2MinuteDrill Dashboard.

Coaches are then able to use the virtual reality headsets to transport players back onto the practice field and show them corrections and concepts, which is especially useful in helping players understand why they need to make decisions and communicate in the manner coaches are instructing them to.

“For us, going through that process, with our quarterbacks putting the headsets on and being able to literally almost recreate passing drills and 7-on-7 reps was phenomenal,” Nesmith says. “They are able to see just a little footage [from an on-field perspective] and are able to just essentially take practice all over again, except that they’re not necessarily throwing a real ball.

“They get a great sense of seeing coverages, safety activation, safeties rotating from two-high to one-high, whether they stay back on the hashes and quickly letting them know if it’s truly middle of field open, closed or not.”

When it comes to developing players, there is simply no replacing quality reps. The way in which virtual reality immerses players in a simulated on-field environment from any location, at any time, makes it as close to real thing as it gets.

2MinuteDrill is also mobile app based, which allows players to conduct film study from anywhere at anytime, using either Android or iOS. There is no need to log into an expensive film-review system or VR gaming system, limiting the opportunities for players to study. It’s the epitome of realistic film study, anywhere and anytime.

Many film study services require coaching staffs to record and send them their footage. 2MinuteDrill has made the editing process self-sufficient, simple and clean. The whole process of taking footage from the field and getting it to the point where players are in the headset reviewing it takes about 10-20 minutes.

Inside the 2MinuteDrill headset, Linebacker perspective:

Finally, the best part of using tech like this today is how affordable it has become at all levels of the game. The 2MinuteDrill virtual reality training platform was developed specifically with affordability in mind.

Ultimately, the measure of any player development tool is how well it teaches a player a skill that they can easily replicate on the field of play. Few tools combine how players want to learn with where players need to apply what they’ve learned like virtual reality film study from 2MinuteDrill.

“Players all learn differently,” Nesmith says. “Some are auditory. Some are visual and there are many different facets to how they learn. And I think that all of these kids are becoming, in one way or another, visual, screen learners.”