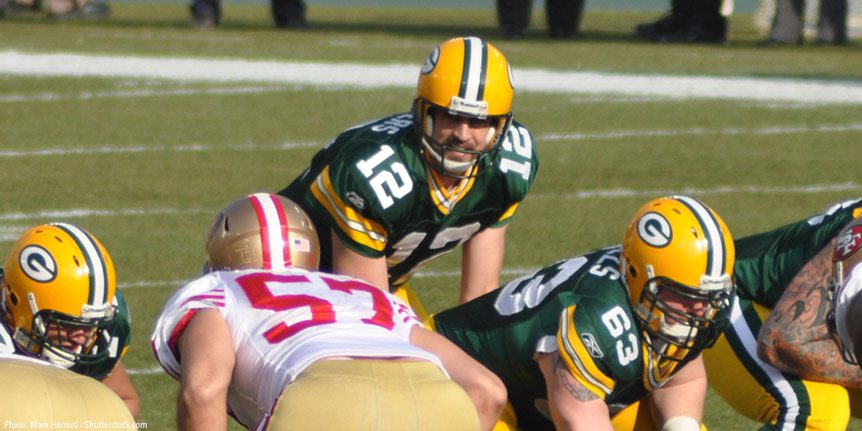 In football terms, simply put, a cadence means that a quarterback uses either a regular or irregular voice rhythm to communicate with his on-field offensive teammates. Quarterback cadence is one of the most important factors in maintaining momentum in an offensive system, and there are many ways for the quarterback to accomplish this task.

Communication and philosophy of the offensive system is important and, for the quarterback, includes other must-learn fundamentals such as reads, concepts, etc.

The following 20 tips, however, can serve as a guide to help you emphasize the importance of quarterback cadence within the framework of your offense.

Tip No. 1: All offensive players must understand all teaching aspects of the pre-snap read and cadence.

Tip No. 2: Quarterbacks must know what “sight adjustments” are, as well as the “uncovered rule” used to make adjustments.

Tip No. 3: Quarterbacks must understand all of the variables in developing a good quarterback cadence and how to analyze the defensive personnel and make adjustments pre-snap.

Tip No. 4: As a prerequisite, quarterbacks must learn how to counter the pressures that can come from all levels of the defense.

Tip No. 5: It’s critical that quarterbacks work on learning all of the audibles that are available and how to use them within varying situations.

Coaching Point: Allow quarterbacks to be creative and let them create their own audible system. But be careful not to allow the quarterback cadence to become too complicated. Doing so only confuses you, the other coaches on your staff and the players.

Tip No. 6: Quarterbacks must mix in a wide variety of tempo into their cadences (slow to fast, vice-versa). Tempo is a key component utilized in the hurry-up offense and keeps defenses off balance and guessing.

Tip No. 7: Remember that “tempo” is a specific word with consistent meaning. For example: “Red is the live color. The play that is called red always begins on the third hut.” This is an example of building in good tempo into the cadence snap count – and is a smooth tempo for everyone on the offense.

Tip No. 8: Quarterbacks hand signals can be used at the line of scrimmage and may have many meanings. The quarterback cadence should be mixed with hand signals, along with usage of the live colors and specific words to relay information to the receivers and rest of the offensive personnel.

Tip No. 9: When in a shotgun formation, the quarterback may use a silent snap count. This is aided by clapping of the hands or even by lifting one foot. Some teams also utilize voice cadence while in the shotgun, as well. When both techniques (shotgun and under center) are used, the quarterback must clearly shout (or use a voice volume that fluctuates up and down) and other non-rhythmic commands. He may also use colors or a numbering system. When combined, it relays the play, snap count or any changes to the offense play.

Coaching Point: In shotgun, during the cadence count, it’s critically important to always remember that the quarterback is communicating the when, where and how of each play to his teammates.

Tip No. 10: To practice cadence, have your quarterback get into the habit of repeating the cadence to himself – and to do so often, throughout the day. Be sure that, while he is practicing his cadences, that the he is covering the progression and snap count. While repeating a cadence, tell your QB to imagine that he is looking at a defense front and analyzing all three defensive levels, while evaluating the indicators. Those indicators include…

Tip No. 11: Quarterbacks must use peripheral vision to make all critical calls and adjustments. Instruct your QBs to “See the field left to right.”

Tip No. 12: Quarterbacks must always check to see if the play call is acceptable with the anticipation of the defensive scheme being presented.

Tip No. 13: Pre-snap, there are many decisions that the quarterback must make within a very short period of time. QB’s must practice this skill and through this repetition, they must learn to “trust their judgement and leadership.”

Tip No. 14: The Pre-Snap Read to the cadence must start with 18 seconds on the clock to allow for all shifting and/or any adjustments.

Tip No. 16: Be sure that your quarterback has a clear understanding of the difference between a “hard count” and a “long count.” In our system, each are defined as follows…

Hard Count: Is used by a QB when calling signals. The QB calls out a number or color at a higher pitch during the cadence procedure. A hard-count example is, “Blue 22, hut, hut, HUT hut…”

Tip No. 17: The quarterback’s Cadence Count may also tell the offense if the play changes, as well as the direction of the formation.

Tip No. 19: Make sure that YOU, as the Head Coach, meets with the referees and officiating crew before the game to discuss your usage of pre-snap motion and shifts. Do so before every game. This tactic WORKS – and it is extremely helpful in preventing and/or reducing pre-snap motion penalties!

Tip No. 21: Avoid indecision. As defenses evolve over time, today’s quarterbacks face many issues and a big problem can often come in the form of indecision. Indecision occurs due to a lack of understanding and by not being prepared. Therefore, coaches must remember to keep it simple when it comes to cadence. There’s no need to make things overly complex.

As a head football coach, I knew that I needed to prepare my quarterback to run a multiple offense by using a special quarterback cadence. I felt that it was important to have several ideas on how to use the cadence to our advantage.

We needed to develop a system that could keep defensive players on their heels and prevent them from anticipating our plays, our tempo and teeing off on our offense. Defensive coaches and players these days are smart with their schemes and pressures.

With today’s scouting methods, defenses can also quickly pick up tendencies by each and every offensive player, and quickly communicate that information to the on-field defensive personnel in-game and on a play-by-play basis.

We developed a cadence set called, “Ready, Shift, Set” that varies to be long or short in length. Later, we successfully incorporated motion into our long counts. The payoff was immediate, as opposing defenses jumped offside a few times when we first started combining motion with long counts.

Shifting became a priority and we utilized shifts to also successfully draw the defense off sides. Many times, it occurred within the first play of an offensive series, which earned us a first-and-five to start a series. (When defenses start guessing with their pressures, it can become a real problem for them.)

In “Ready, Shift, Set,” our offense would break the huddle and come to the LOS. The quarterback lined up behind the center with his hands placed on his own thighs – NOT placed under center – and calls out “Ready, Shift…” as our backs and receivers shifted into our standard Single-Wing Formation. Again, we were amazed at how many times the defense jumped off sides just by using this tactic alone. (An easy 5-yard advantage for our offense!)

We shifted again into the Single Wing and ran the play. The quarterback cadence after the shift was: “Set, Ready, Shift – Hut One, Two…” (and sometimes Three) and throughout the game we would mix things up, snapping the football after “One,” “Two” or “Three” on any given play.

After a play (if we did not score), our offense would come to the LOS and the quarterback cadence call was: “Set, Ready, Shift…” and we’d then immediately snap the ball while the defense was sitting on their heels expecting the same offensive tempo and waiting for us to shift, pre-snap.

Whenever a defense is unprepared, the offense has the advantage and can quickly gain control of level one. If you can control level one, good things will happen.