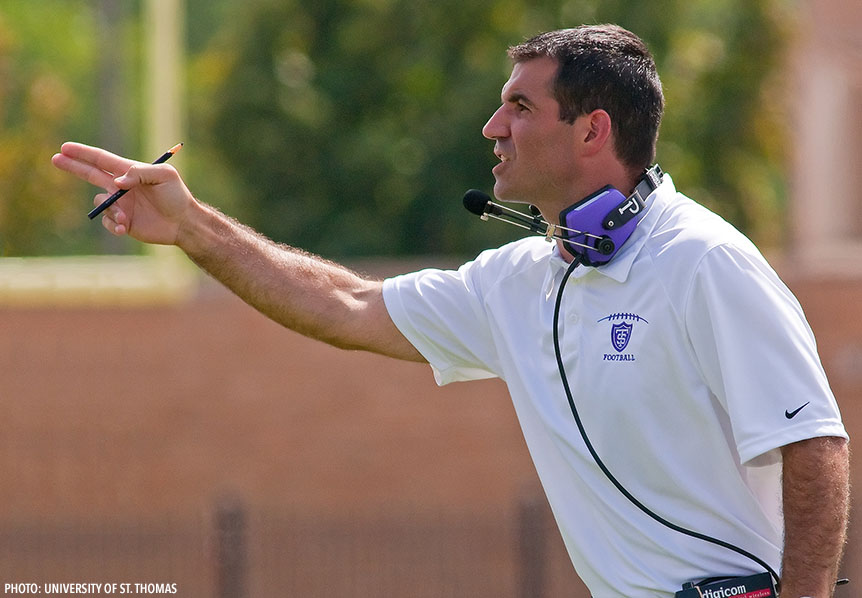 Cancelled seasons. Restarted seasons. Cancelled games. Rescheduled games. Spring football. The global pandemic rollercoaster ride of 2020 has taught every football coach the value of staying flexible and adapting to change in a world once ruled by routine.

Yet for some coaches, through no fault of their own, football was taken away from them last fall via the cancellation of fall sports due to the novel coronavirus. In many instances, for these coaches, this was the first fall since their early childhood that they have NOT had the reliable routine of a football season in their lives when the leaves changed color.

Glenn Caruso, head football coach at the University of St. Thomas in St. Paul, Minn., a program preparing to make the jump from a Division III to provisional Division I (FCS) status in the Summit League on July 1, 2021, says this is the first fall he can remember without a football season in his life since 1982.

“My mom passed away when I was very young and I started playing football shortly thereafter,” says Caruso. “So, in a strange way, my life’s memories are divided into ‘football, no football’ segments, which run parallel to ‘mom, no mom’ in my life.’

“Unfortunately, I don’t have a lot of memories of my mom because I was really young. On the positive side, if you want to look at it positively, is that almost every timeline I can possibly come up with in my head is painted against a background and canvas that involves football.

“It doesn’t matter if I was playing for the Glenville Mavericks, or the Greenwich High School Cardinals, or the Ithaca Bombers, or coaching at North Dakota State for the Bison or coaching at the University of St. Thomas, the comfortable blanket of a fall football season, and the routine that comes with it has always been in my life.”

For those coaches who missed out on an opportunity to have a fall football season in 2020, Caruso says you need to look beyond the pain, frustration and negative energy surrounding the pandemic, and channel the positive aspects and unique perspective that 2020 brought with it.

“My father used to tell me that ‘blessings and burdens are not mutually exclusive,’” says Caruso. “For as much as it hurt to not play football last fall, it made me acutely aware of the opportunities and incremental successes that I experience as a football coach throughout any given year.

“For example, in three weeks of fall pre‐season camp, I calculated between 74 and 78 touches that I would have had to meet with the entire team along a three‐week period.  Those touches, where you get an opportunity to teach team culture, develop attitudes and humanity — all those things that can really drive someone and turn out to be a difference maker from a developmental standpoint.

“As a coach, you realize the gift of time is the one that simply cannot be replaced.”

For those coaches who missed out on an opportunity to play football in 2020, however, it’s becoming aware of all the little things, the fun things and even the seemingly mundane things unique to a football game day that can hit a coach right in the feels.

“Another thing I’ve missed in 2020 is driving my dad’s old car on game day. My dad passed away 15 years ago, and every year since, only on game days, I back his old, rusty 2003 Toyota Corolla out of my garage and drive it to the stadium. That car is strictly reserved for game days. It just occurred to me now that I haven’t touched that car this year.”

Caruso says that even the absence of familiar sights and smells unique to a fall football season hit him like a sledgehammer last year.

“I missed the feeling of walking into the dining hall for the pregame meal 4 hours and 10 minutes before kickoff. I miss the rhythm and circumstances of team prayers and being together as a collective group.

“Just a week ago, I realized the patterns and movements of how I walk around campus are now so different than in‐season. I walked up a stairwell that is located in a building that I don’t go into unless it’s game day. The second I started walking up those stairs, the smell of that hallway just smacked me in the face.

“It’s unbelievable how deeply ingrained all these things are in our minds as football coaches. You miss all of them. I missed them because of what they represent — all of these things associated with the football season. Things near and dear to our hearts, that we aren’t even aware of under ordinary circumstances during a ‘normal season.’ And you can’t separate one thing from the other — but you’ve missed them all collectively.

“To me, that is just beautiful.”