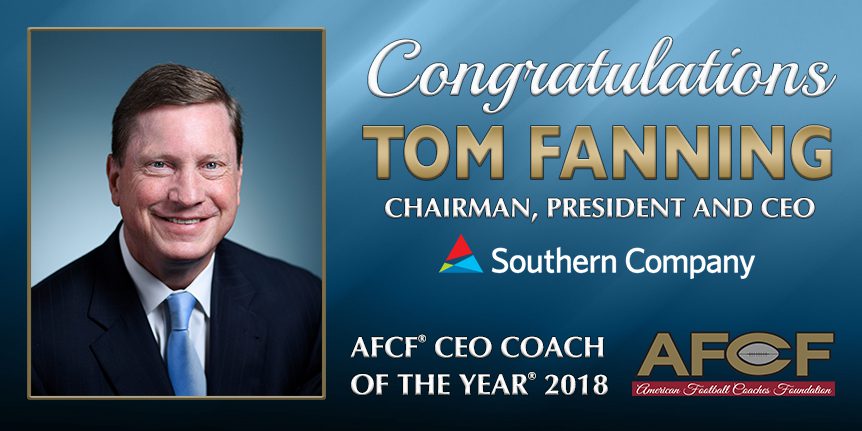 The American Football Coaches Foundation® today announced that Tom Fanning, Chairman, President and Chief Executive Officer of Southern Company, is the 2018 recipient of its CEO Coach of the Year® Award. This is the highest honor bestowed by the organization.

“I am honored to receive the 2018 CEO Coach of the Year Award and join such an amazing group of recipients.”

“I am honored to receive the 2018 CEO Coach of the Year Award and join such an amazing group of recipients,” Fanning said. “My fondest memories are recalled from the decades I spent coaching youth sports. While the goal was to guide my teams to victory, the purpose was to teach the athletes principles such as teamwork, discipline and leadership to prepare them to become the type of citizens who make our communities a better place to live because they are there. Thank you to the American Football Coaches Foundation, and the entire membership and staff of the American Football Coaches Association for this tremendous honor.” Fanning was selected for the award by a unanimous vote of the AFCF® Board of Directors. He will be honored at The Foundation’s CEO Coach of the Year Dinner, held at the Georgia Aquarium in Atlanta on April 23, 2018.

“Tom Fanning is one of the best CEO’s in America and his leadership at Southern Company is moving the needle on the future of energy.”

“Tom Fanning is one of the best CEO’s in America and his leadership at Southern Company is moving the needle on the future of energy,” AFCA Executive Director Todd Berry said. “The AFCF Board of Directors voted him our 2018 AFCF CEO Coach of the Year for a reason. He is one of the great business leaders in our country, and as a former coach and player, he knows the impact coaches can have on our society.”

Proud to see @SouthernCompany so well represented at @NA_YGN. The future of nuclear energy is bright in the hands of these capable young leaders. pic.twitter.com/c2lmBK7ZU9

Prior to being COO, Fanning was the company’s chief financial officer where he was responsible for the accounting, finance, tax, investor relations, treasury and risk management functions. In that position, he was the chief risk officer and was responsible for corporate strategy. Before being named CFO, Fanning was the president and CEO of Gulf Power.

Member of the Board

Fanning is co-chair of the Electricity Subsector Coordinating Council, which serves as the principal liaison between the federal government and the electric power sector to protect the electric grid from threats that could impact national security, including cyber and physical terrorism as well as natural disasters. He is also a member of the international advisory board of the Atlantic Council, which promotes constructive leadership and engagement in international affairs, and the American Energy Innovation Council, a group of America’s leading business executives working to build broad bipartisan support for public and private investments in innovation.

The AFCF, a 501(c)(3) nonprofit organization, was established by the American Football Coaches Association in 1998 to fund its educational mission. Its specific responsibility is to seek contributions from a broad range of donors – friends, businesses, corporations, foundations and trusts –to support and implement existing AFCA educational programs; and, to develop exciting and dynamic new initiatives that will serve the coaches, the student-athletes, and the schools they represent. Contributions generated by The Foundation will ensure that the coaching community will continue to have the finest possible professional development and educational tools, now and in the future.

If you would like to donate to the American Football Coaches Foundation, please visit our AFCF Donation Page.