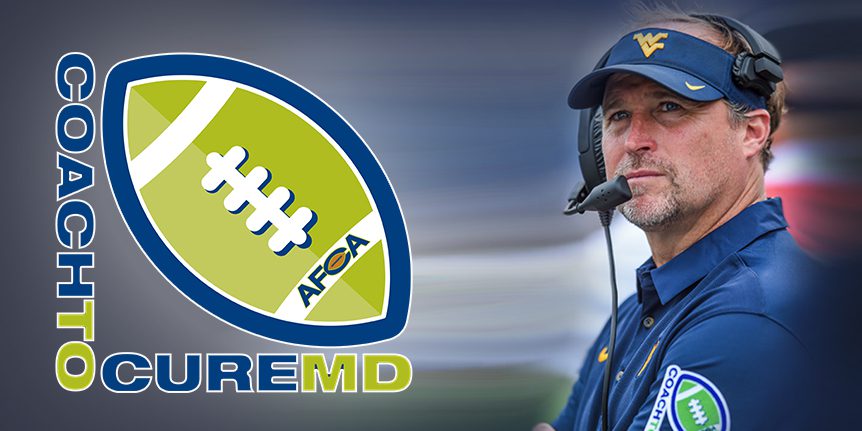 On the weekend of September 29, American Football Coaches Association (AFCA) members will once again wear the traditional Coach To Cure MD logo patch on the sidelines, and college football fans will be asked to donate to projects supported by Parent Project Muscular Dystrophy (PPMD), the largest, most comprehensive nonprofit organization in the U.S. focused entirely on Duchenne. Many of those games will also recognize a local Duchenne family on the field before or during the game. Coach To Cure MD began in 2008 with more than 200 schools and 2,700 coaches involved. Eleven years later, that effort has expanded to over 600 schools and more than 11,000 coaches wearing the logo patch on the sidelines and participating in Coach To Cure MD events. Thanks to the coaches, teams, and families involved, this program has seen over 300 percent in participation since its inception.

Duchenne is the most common fatal genetic disorder diagnosed during childhood, primarily affecting boys of all races and cultures. People with Duchenne develop progressive muscle weakness that eventually causes loss of mobility, wheelchair dependency, and a decline in respiratory and cardiac function. Currently, there is no cure for Duchenne. But thanks to Coach To Cure MD and the work of Parent Project Muscular Dystrophy, there is hope.

“Each year, our coaches look forward to wearing the Coach to Cure MD patch so that they can help bring awareness and much needed funds to help find a cure for Duchenne muscular dystrophy.”Todd Berry

A decade ago, few people in America knew about Duchenne and fewer still had reason to hope that any treatment for the fatal genetic disorder was on the horizon. But thanks in part to college football coaches, awareness of the disorder is at an all-time high and new treatments are in the pipeline – including two approved therapies – giving optimism for the families battling this progressive muscle disorder.

“The AFCA and our members take great pride in our association with Parent Project Muscular Dystrophy,” AFCA Executive Director Todd Berry said. “Each year, our coaches look forward to wearing the Coach to Cure MD patch so that they can help bring awareness and much needed funds to help find a cure for Duchenne muscular dystrophy.” In addition to the coaches’ efforts, families affected by Duchenne will also gather for fundraising tailgate parties on campuses around the country to encourage more fans to get involved.

“Football is a team sport. It requires the unique skill set of each individual player and coach in order for a team to be successful. Similarly with Duchenne, it will take a community of researchers, scientists, clinicians, industry partners, and of course families, to find treatments and stop the progression of this devastating disease. We couldn’t fight this fight without the ongoing commitment of every coach in the AFCA,” said Pat Furlong, founding president and CEO of PPMD. “The awareness raised for Duchenne has been nothing short of incredible, and we continue to raise more money every year as a result. Because of the dedication of all the coaches who wear a patch in honor of our families and thanks to college football fans nationwide, we continue to move closer to the day we end Duchenne. Thank you for joining our team and helping us tackle Duchenne this September 29!”